Prime Minister Modi earlier on Tuesday inaugurated a five-storey building of CIC at Munirka in the national capital. 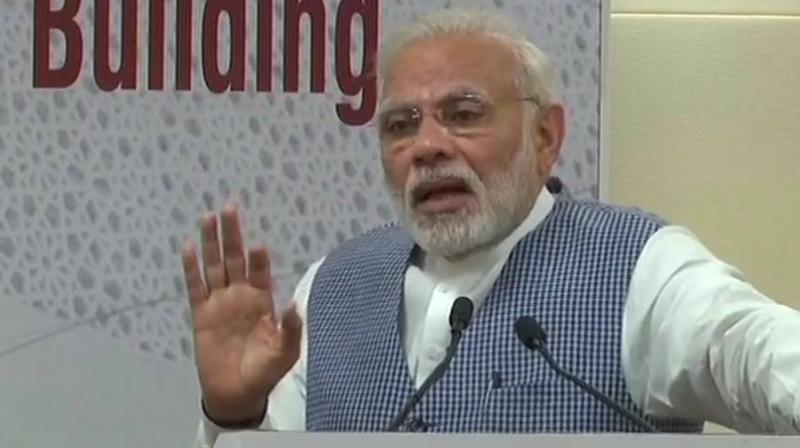 The Prime Minister was speaking at the inauguration function of new premises of the Central Information Commission. (Photo: ANI/Twitter)

New Delhi: Prime Minister Narendra Modi on Tuesday said an empowered citizen is the strongest pillar of the democracy and pointed out five pillars of modern information-'Ask, Listen, Interact, Act and Inform'.

Prime Minister Modi earlier on Tuesday inaugurated a five-storey building of CIC at Munirka in the national capital.

The CIC is the apex appellate body established by the Right to Information Act 2005.

Speaking at the function, he further said that the Centre has been making efforts since last four years to empower citizens.

"If I talk in detail about the first pillar 'ask', then all the questions asked by the people on government policies and projects are given priority," he added.

Talking about the second pillar 'listen', he said, "Today India has a government which listens to people. It listens to the suggestions given by you on social media. We have sometimes made changes in our policies based on the feedback given by people."

He said that the third pillar 'interaction' was as important as the previous two and added, "I believe there is an emotional connect between the government and the people, when there is an interaction between the two."

"The fourth pillar is 'act'. If there is no action taken after asking, listening and interacting, then all the hard work done is a waste. While addressing all the complaints, when Goods and Services Tax (GST) was implemented, we made new rules and many rules were changed too," he added.

Speaking about the fifth pillar 'inform', he said it was the duty of the government to give right facts about their actions.