Arguments on Karti Chidambram's bail plea will be held on March 9. 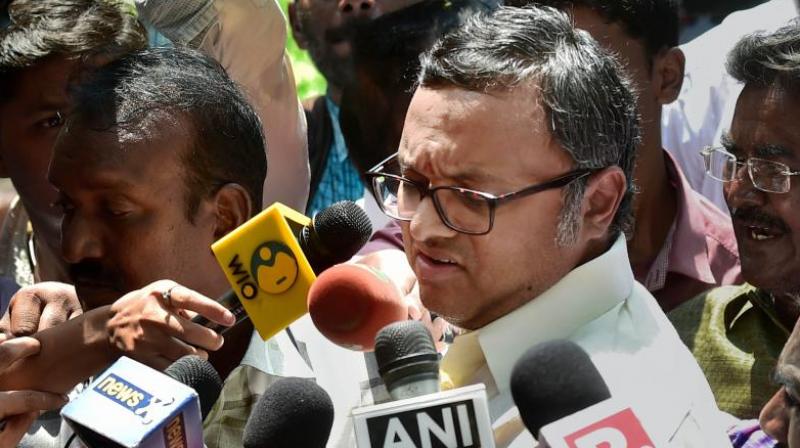 The CBI produced Karti Chidambaram before a Delhi court and sought extension of his custody to quiz him in the INX Media corruption case. (Photo: PTI/File)

Arguments on Karti Chidambram's bail plea will be held on March 9.

The court had earlier on Tuesday concluded the hearing on the arguments on the CBI's plea seeking nine-day custodial interrogation of Karti.

The CBI produced Karti Chidambaram before a Delhi court and sought extension of his custody to quiz him in the INX Media corruption case saying "new revelations" have come up and his custodial interrogation was necessary to confront him with the "new facts".

The agency, which produced Karti on expiry of his five-day police custody before special judge Sunil Rana, said though there has been "substantial progress" in last four days into the investigation into the case, he has "not been cooperating" and not parting with his phones passwords and to every question he has been saying that "I am politically victimised".

Additional Solicitor General (ASG) Tushar Mehta, appearing for the CBI, said Karti was taken to Mumbai and was confronted with Indrani Mukerjea, one of the then promoters of INX media at the Byculla prison and her statement has been just one of the evidences. "New revelations in the matter have come up day before yesterday. Cannot divulge much about investigation but we need his further custody to confront him with the new facts," Mehta told the court and also opposed Karti's bail plea saying that the investigation was at "crucial stage" and the CBI needs two weeks time to file detail reply to his bail application.

The ASG alleged that witnesses in the case are being approached and evidences destroyed.

The Supreme Court had earlier on on Tuesday refused to grant Karti Chidambaram, the son of former Union minister P Chidambaram, interim protection from arrest by the Enforcement Directorate (ED) in an alleged money laundering case related to INX Media.