H Raja has reportedly said someone else had inadvertently posted it on his page. 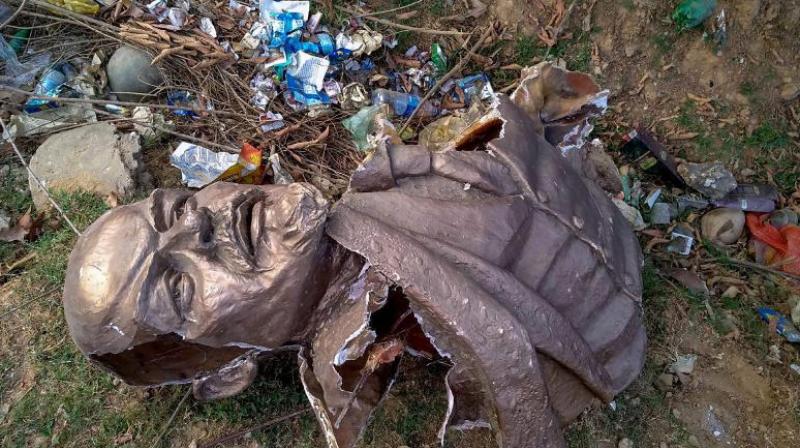 Remains of the five-feet-tall statue of Lenin which was allegedly demolished by a pay-loader at Belonia in South Tripura district on Monday afternoon and was thrown at the nearby jungle. (Photo: PTI)

Chennai/Agartala: Political leaders in Tamil Nadu are protesting against a post put up by senior BJP leader H Raja where he wrote that the statue of social reformer Periyar (EVR Ramasamy) in Tamil Nadu would be razed just like communist revolutionary Vladimir Lenin's statue in Tripura on Monday.

"Who is Lenin and what is the connection between Lenin and India? What connection has India with Communists? Lenin's statue has been removed in Tripura. Today it is Lenin's statue in Tripura, tomorrow it will be the statue of caste fanatic EVR Ramasamy," he posted in Tamil on his Twitter account.

H Raja has reportedly said someone else had inadvertently posted it on his page.

Meanwhile, violence erupted in Tripura and various other states after a statue of communist icon Lenin, has been pulled down by some people with an excavator machine at Belonia in South Tripura district on Monday.

Left Party, CPI(M) has been blaming BJP workers responsible for pulling down the station of Lenin.

CPM's general secretary Sitaram Yechury has announced country-wide protests, accusing the BJP of "thriving on political violence" as clashes broke out between supporters of the two parties in Tripura after assembly election results were announced.

The BJP won the Tripura election, dethroning the CPM after 25 years.

In a memorandum to Prime Minister Narendra Modi, CPM Member of Parliament in the Lok Sabha, Mohammed Salim, has alleged that "goons of BJP have unleashed terror and all round attack on members and supporters of CPI-M...we request your immediate intervention to stop these attacks."

Home Minister, Rajnath Singh, has spoken to Tripura's police chief asking him to ensure law and order till a new government is in place.

BJP leader Subramanian Swamy defended pulling down of a statue Lenin, saying the late Russian leader was "a terrorist" and questioned if the statue of such a person could be installed in India. He said, "Lenin was a foreigner. He was, in a way, a terrorist because the number of people he killed there (in Russia) after imposing dictatorship there. And (you) want statue of such a person erected in our country?"