Will grant special category status to AP if voted to power in 2019: Rahul

Though the ruling TDP is part of the NDA govt at the Centre, its leaders are protesting against the govt for 'neglecting AP'. 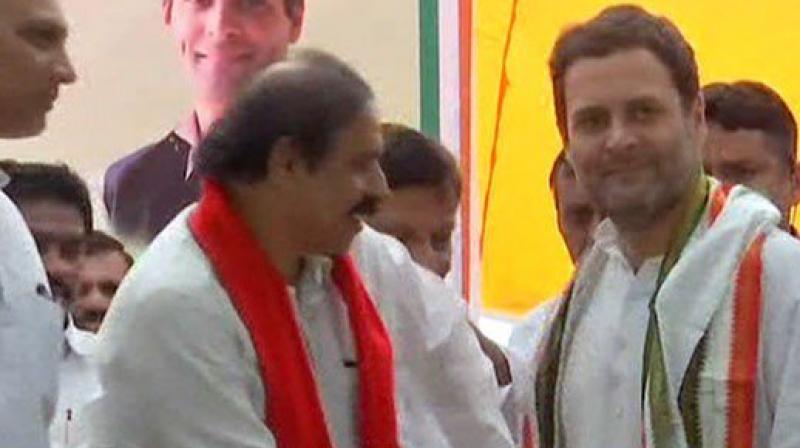 Congress President Rahul Gandhi on Tuesday said the party will grant special category status to Andhra Pradesh if voted to power in 2019, even as the AAP too extended its support to the demand. (Photo: ANI/Twitter)

New Delhi: Congress President Rahul Gandhi on Tuesday said the party will grant special category status to Andhra Pradesh if voted to power in 2019, even as the AAP too extended its support to the demand.

"We will give special category status to Andhra Pradesh. It's the first thing we will do after coming to power in 2019," he told a group of party workers who protested at Jantar Mantar demanding special status for Andhra Pradesh.

"I am confident that if we stand together we will convince the Government of India and Prime Minister Narendra Modi that what is due to the people of Andhra Pradesh should be given to them," he added.

He later tweeted: "It is my belief that if the opposition stands united on this issue, we can force the BJP Govt to do justice to the people of Andhra." Aam Aadmi Party MLA Somnath Bharti, who also joined the protest, said he had come to extend support on "behalf" of Delhi Chief Minister Arvind Kejriwal.

"I have come with the Delhi chief minister's message of support. The AAP will support the Congress wherever they raise this demand, be it inside or outside Parliament," he said.

Though the ruling Telugu Desam Party (TDP) is part of the NDA government at the Centre, its leaders are protesting against the central government for "neglecting Andhra Pradesh".

The opposition YSR Congress Party has announced that all its five MPs would resign on April 6 if the demand was not met. The demand was raised after erstwhile Andhra Pradesh was bifurcated.

The protesters claim that the bifurcation caused a huge revenue deficit for the successor Andhra Pradesh. The Centre announced a "special package" in 2016 for Andhra, but the TDP government claimed no funds have been released under the package. This has turned the focus back on special category status for AP.