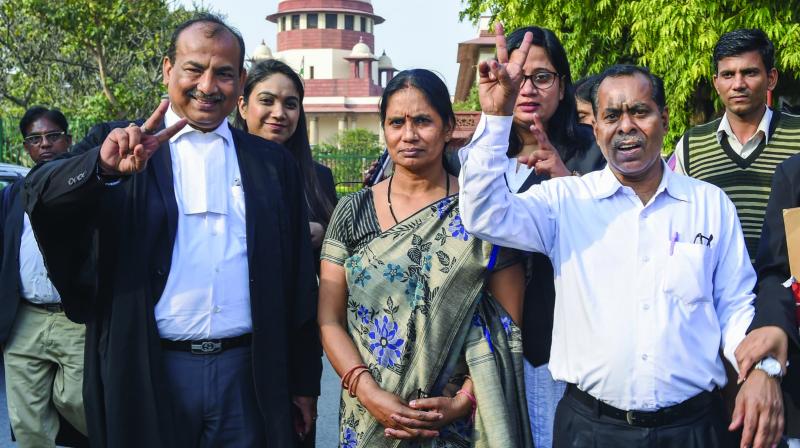 New Delhi: After exhausting almost all legal remedies, all the four convicts in the Nirbhaya gangrape-murder case are due to be hanged till death in Delhi’s Tihar Jail at 5.30 am on Friday, March 20. Additional sessions judge Dharmendra Rana on Thursday issued fresh death warrants after being told by the Delhi government that the convicts had exhausted all their legal remedies.

This is the fourth time that the court has issued death warrants against the four convicts. The first warrant for their execution was for January 22, the second for February 1 and the last one was for March 3.

Now, the only way to delay the hanging of the convicts is if the Supreme Court grants a fresh stay on their death warrants, which is  possible only if one of the convicts — Pawan Gupta (25) — makes his case before the court that President Ram Nath Kovind had not applied his mind while rejecting his mercy petition on Wednesday. But similar pleas by the other convicts — Mukesh Kumar Singh (32), Vinay Sharma (26) and Akshay Kumar Singh (31) — had earlier been rejected by the nation’s highest court.

The second remote possibility of getting a stay on the execution of the convicts is if their lawyers get relief from the Supreme Court, which at present is hearing a matter on whether death row convicts in the same case can also be hanged separately.

On Thursday, after fresh death warrants were issued against the convicts,  Nirbhaya’s mother Asha Devi said: “The morning of March 20 will be the morning of our lives... Our struggle will continue till they are hanged... If there is any chance, I want to see them (convicts) dying).”

Lawyer A.P. Singh, who helped the four convicts in filing multiple petitions challenging the execution, termed the death warrants as a “judicial killing”. He said: “Media pressure has already killed them. They have been killed four times with four death warrants. They have been hanged three times.”

Even Nirbhaya (fearless), in her dying declaration made in front of a magistrate on December 21, 2012, eight days before she died, had stated: “I want them (convicts) to be hanged so that no other criminal can do this kind of torture and ill-treatment to any other girl. In fact, such criminals should be burnt alive.” On the fateful night, six men attacked Nirbhaya after she boarded a bus with a male friend. The two were returning after watching a movie at the Select Citywalk mall in Saket.

Of the six, one committed suicide inside Tihar Jail. Another was a juvenile who was let off after being sentenced to a reform home for three years, the maximum punishment for a minor.

In May 2017, the Supreme Court had upheld the death sentence of the four convicts. The court called the crime as “the story of a different world”. “If ever a case called for hanging, this was it,” said the three judges, confirming the death penalty handed by two courts. The court referred to the dying declaration of Nirbhaya and said the “brutal and demonic” crime had been proved beyond doubt.

On Thursday, a three-judge bench of the Supreme Court headed by Justice R. Banumathi said: “The question is whether there can be separate hanging or whether it has to be simultaneous. We will go into it.” The bench, also comprising Justices Ashok Bhushan and A.S. Bopanna, posted the plea for arguments on merits on March 23 and made it clear that no adjournment would be given.

Solicitor-general Tushar Mehta, appearing for the Centre and the Delhi government, told the bench that these convicts had taken the justice delivery system for “a ride” and made a “mockery” of it by adopting delaying tactics. The execution of the death warrants of these convicts have been deferred thrice so far due to delays by them in exhausting their legal remedies.

Mr Mehta, who said the “credibility of the system is at stake”, informed the bench that a trial court had fixed March 20 as the date of execution of the four convicts who had exhausted all their legal remedies. During arguments, Mr Mehta said there was no statutory provision which stipulates that the convicts have to be executed simultaneously, and as per the law, only the trial of a case has to be conducted simultaneously. “Today, there are four convicts in this case. Tomorrow, there may be a case having 10 or 20 such convicts and they may again delay the execution by moving separate forums at different times,” he said.