India   All India  06 Mar 2020  Minister says no coronavirus risk at religious gathering of a million women
India, All India

Attukal Pongala, to which millions of women throng, will be held as usual on March 9 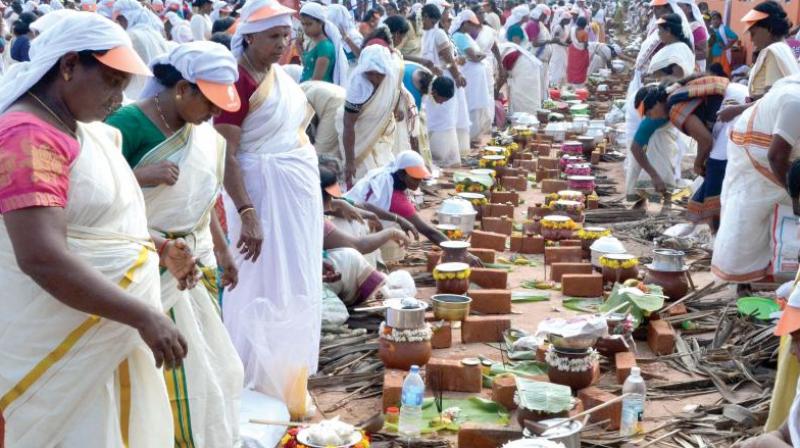 Attukal Pongala is a festival in which women offer to god a pudding made in an earthen pot.

Kochi: At a time when conferences of as few as a hundred people are being cancelled due to the coronavirus scare, the Kerala government has given the nod for the single biggest religious gathering of women in India.

It’s the famous Attukal Pongala, an all-women festival, will be held as usual on Monday March 9, 2020 in Thiruvananthapuram.

Women throng in big numbers on the streets and roads of Thiruvananthapuram to perform rituals such as offering the Pongala, a sweet pudding prepared in earthen pots, at the Attukal Bhagavathy temple.

Millions of women devotees from across the country and foreign countries participate in Attukal Pongala. Thirteen years ago, this entered the Guinness Book of Records as the largest gathering of women ever.

Yet, Kerala health minister K K Shylaja said today that there would be no risk of Covid-19 (coronavirus) transmission at the Attukal Pongala.

She said there will be tightened vigil though – for what purpose, it is not known.

While it boggles the mind how a gathering of a million would bear no risk of transmission while a meeting of a few would, the minister went on to reel off a list of precautions to take.

“The public will have to be extra careful,” Shylaja advised. “Health experts will examine foreign nationals who offer the Pongala.”

“There is a need for responsible behaviour from the general public to prevent community transmission of the virus. People have to adhere with the health department’s instructions on quarantine of persons with virus symptoms and other guidelines,” she added.

Some public health experts found it odd that the government would allow the Attukal Pongala at a time like this.

Kerala was the first state in India to report a Covid-19 positive cases. Though three cases of virus infection were reported, all of them got better and went home.