In Karong, police opened fire when some people tried to snatch the EVM from a polling station after beating up the official 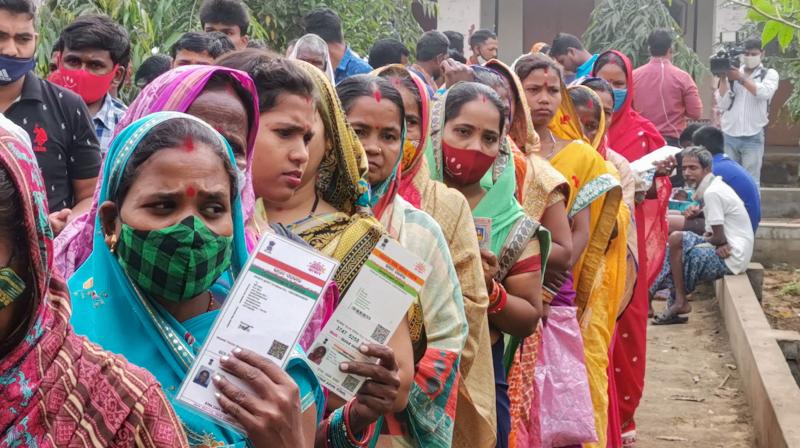 Guwahati: Amid reports of sporadic incidents of violence, the final phase of Assembly elections for 22 seats in Manipur recorded a voter turnout of 76.04 per cent on Saturday.

According to police one person was killed and another was injured during the police firing at Karong in Senapati district, which incidentally also had the highest voter turnout, while in Thoubal district a BJP activist was gunned down allegedly by a Congress worker.

In an incident in Thoubal in the early hours when the victim, L. Amuba Singh, along with other BJP activists, went to the residence of the Congress worker and asked him to stop campaigning as the stipulated time was over, a police officer said. During an altercation, the Congress worker allegedly fired at Singh. In Karong, police opened fire when some people tried to snatch the EVM from a polling station after beating up the official.

The Congress activist, who is yet to be arrested, was also injured after BJP workers hurled stones at him when Singh was shot.

In another incident, unidentified miscreants lobbed a crude bomb at the residence of expelled BJP leader Ch Bijoy in Lamphel area in Manipur’s Imphal West district, police said. No one was injured during the incident.

Polling halted at the 36 Tobumai polling station after the clash between supporters of both the Naga People’s Front and Independent candidates. It is said that clashes broke out when two buses carrying voters from Kohima in Nagaland were attacked by miscreants.

While the Thoubal district falls in the valley area, the other five electoral districts are in the mountainous areas bordering Assam and Nagaland, as well as Myanmar, making security forces maintain maximum vigil along both the international and the inter-state borders. Manipur Chief Electoral Officer Rajesh Agrawal told reporters that 4,988 personnel were deployed in 1,247 polling stations in the six electoral districts to conduct the exercise.

The second phase of polling was extremely crucial for all parties as it would play a decisive role in formation of the next government in the state. Of the total 92 candidates in the fray, 22 candidates are from the BJP, 18 from the Congress, 10 each of Janata Dal-United (JD-U) and Naga People’s Front (NPF), 11 of National People’s Party (NPP), two each of Shiv Sena and Nationalist Congress Party (NCP), three of Republican Party of India-Athawale (RPI-A), one each of Rashtriya Janhit Sangharsh Party (RJSP) and CPI, and 12 independent candidates.