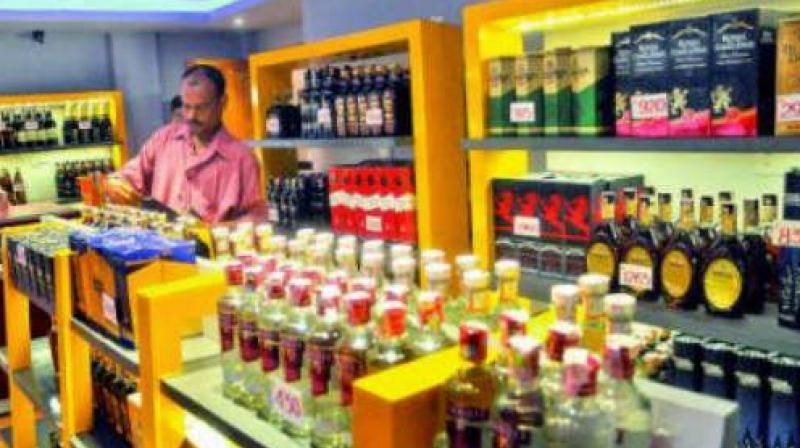 Shimla: The Himachal Pradesh government on Wednesday re-notified 16 state highways as major district roads (MDR) to prevent the closure of liquor vends in view of the Supreme Court's order banning sale of alcohol within 500 metres of national and state highways.

Nearly 950 liquor shops came within 500 metres of state highways. But the number of vends facing closure reduced after the distance was relaxed to 220 metres for Himachal Pradesh, Meghalaya and Sikkim by the Supreme Court on March 30, 2017, an official said.

Most of these state highways were in the mid and lower hills where the concentration of liquor vends is more. By the re-notification they would not face closure or relocation, he said.

The re-notification of the 1,304 km of state highway as MDR will save many vends from closing and the revenue of the government will not be affected, the official said.

Meanwhile, around 90 per cent vends were sold today in Kangra and Sirmaur districts after the fifth round of auctinoning, he said.

The response was poor in Shimla, Chamba, Una and Mandi districts and Baddi in Solan district. The State Excise and Taxation Department has decided to hold the sixth round of auction tomorrow, the official said.

The vendors have been allowed to exhaust the last year's stock within a week on payment of revised license fee and other duties, he said.

In order to make the shops viable, permission has also been granted to open sub-end vends within 2-km of the main vends on payment of a nominal fee, the official said.

The Department has so far fetched 80 per cent of the revenue as compared to last year, and hopes to garner more from further auctions, he said.

"We are trying to persuade the contractors to participate in the auction, but in case liquor vends are not sold these would be allotted to HP Beverages Corporation and there would be no revenue loss," Principal Secretary Excise and Taxation Onkar Sharma said.