The first elected Communist ministry of India was sworn in under EMS’ leadership 60 years ago on April 5. 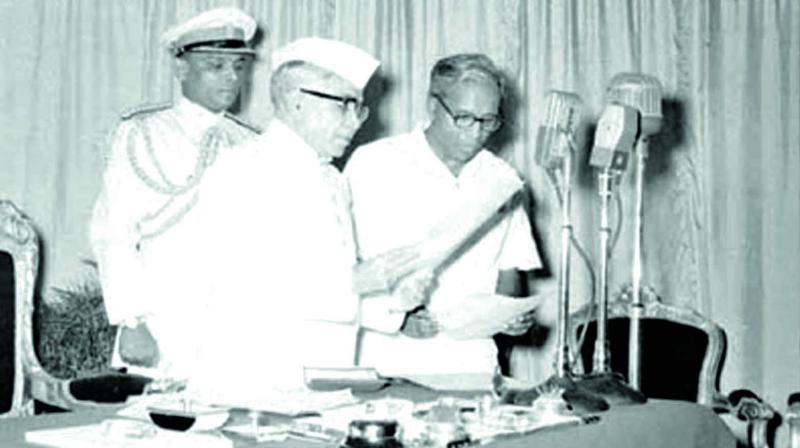 E.M.S. Namboodiripad being sworn in as the first chief minister of Kerala on April 5, 1957.

On April 5, 1957, the government, led by the Communist Party of India (prior to split), came to power in Kerala. Many acclaim it as the first ever elected Communist government. But EMS Namboodiripad, who had headed that government, in one of his columns, stated that it was incorrect. He wrote that Cheddi Barret Jagan, a Marxist-Leninist, had become chief minister of British Guayana in 1953 and was overthrown in 133 days. Nevertheless, the assuming of office by the Communists in Kerala, who had a facile win in the 1957 elections, was an event which drew international attention.

But it needs mention that power to communists arrived late in Kerala due to the anxiety of the Congress to prevent communists from coming to power. In the 1954 elections to Travancore-Cochin assembly, the Left Front comprising Communists, Revolutionary Socialist Party and Kerala Socialist Party, which had an understanding with the Praha Socialist Party, were in a majority, though Congress was the single largest party.

The ingenious tactics of the Congress prevented Communists from coming to power in a coalition in 1954. Congress with 45 seats in the assembly offered to support (without sharing power) the PSP with 19 members. This is in fact the forerunner to the Charan Singh and the Chandrasekhar experiments at the national level much later in 1979 and 1991 respectively.

Analysts have long held that Kerala went against the grain in electing Communists to power contrary to the national trend. Seldom has it been discussed that Communists could achieve a victory in Kerala in the then prevailing adverse international climate after Krushchev' s Stalin revelations at the 20th Congress of Communist Party of Soviet Union (CPSU) and Soviet intervention in Hungary, both in 1956.

These events triggered a crisis in Communist movements, especially in the parties of the West. Indian Communists had their own quota of differences on what attitude to be taken towards the Congress, led by Nehru, which imprinted the slogan of building a socialistic pattern of society and public sector reaching commanding heights of the economy in 1956. Eventually, this led to the split in the Communist party in 1964.

In the present era of electoral politics, when the far right is becoming adept in social engineering, the strategy adopted by the Communists then, especially its leaders, is worth recalling. Mannathu Padmanabhan and Nair Service Society were on the same page against the Congress. This was effectively exploited in the selection of candidates in Travancore-Cochin area by the Communists. The party fielded candidates, anticipating NSS support. In Malabar area, of course, the Communists had developed a mass base by being in the forefront of agrarian struggles and social reform movements.

Insulation from adverse international headwinds and a careful social engineering by the Kerala leadership saw the Communists romping home with a razor thin margin and forming a government, which initiated many pioneering reforms. But the counter engineering by organising all caste organisations of Hindus and minority denominations saw the communist government being dismissed despite having a parliamentary majority.

In the next election in 1960, the vote share of the Communists rose to 43 percent, but they tasted defeat against a coalition of Congress, PSP and Muslim League. Thus began an era of coalitions in Kerala, about which much has been said and experienced.

The writer is a commentator on polity