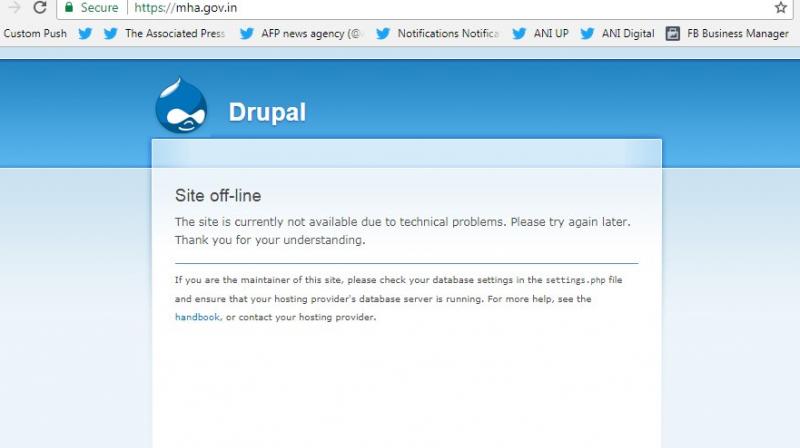 The MHA site was down soon after the news came that the Defence ministry's website was hacked. (Photo: ANI | Twitter)

New Delhi: Minutes after the Ministry of Defence website started showing error on the page, with Chinese characters appearing on it, the home page of Home Ministry has been temporarily taken down as part of extra precautions.

An official spokesperson said the National Informatics Centre (NIC), which hosts the MHA site, is upgrading the security system of the website leading to its temporary suspension.

"The requested service is temporarily unavailable. Sorry for Inconvenience. It would be available soon," is the message that comes when one opens the MHA website.

The spokesperson said the move has been taken as part of extra precautions.

The MHA site was down soon after the news came that the Defence ministry's website was hacked.

Ministry of Defence webpage shows Chinese characters on it.

Defence Minister Nirmala Sitharaman tweeted that "appropriate action" had been initiated in the matter.

Action is initiated after the hacking of MoD website ( https://t.co/7aEc779N2b ). The website shall be restored shortly. Needless to say, every possible step required to prevent any such eventuality in the future will be taken. @DefenceMinIndia @PIB_India @PIBHindi

This comes on a day when the Indian Air Force announced that it was starting its largest ever war-games focusing on the dual threat of China and Pakistan.

Authorities had temporarily taken down the Ministry of Home Affairs website last year after a cyber attack was reported.