Leader of Opposition in Rajya Sabha Mr Ghulam Nabi Azad accused the government of not reaching out to the Opposition parties. 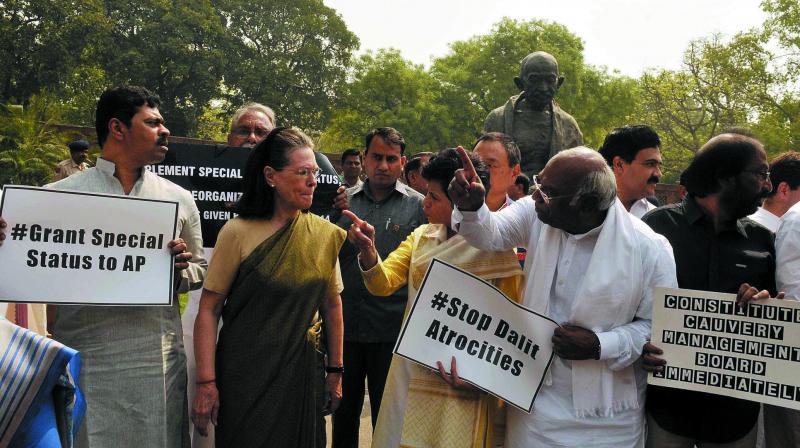 New Delhi: A group of Opposition parties, led by the Congress, on Thursday staged a protest near the Gandhi statue and formed a human chain in the Parliament Complex over various issues such as the “failure” of the NDA government to run Parliament and grant special category status to Andhra Pradesh.

The MPs raised slogans against the government over several issues ranging from the dilution of the SC/St Act, Rs 12,000 crore Punjab National Bank fraud to the farmer crisis in the country among several others.

Leading the protest was UPA chairperson Sonia Gandhi and Congress president Rahul Gandhi. Leaders of the TMC, Left parties, NCP, DMK, Samajwadi Party, BSP and the TDP, which severed ties with the BJP recently, were present at the protest.

Leader of Opposition in Rajya Sabha Mr Ghulam Nabi Azad accused the government of not reaching out to the Opposition parties.

“Let me also make it clear that this is for the first time that no senior or Cabinet minister has approached the Leader of the Opposition Rajya Sabha on behalf of the government or none of the Opposition party leaders have been approached by the Government of India. It should be a surprise. It should be a surprise for the entire country because they are scared. They are scared that their involvement in the bank fraud, their involvement in so many other cases, that they will be caught and exposed and caught red handed,” Mr Azad said.