A recent heartening development is that the government has finally woken to the seriousness of India’s health crisis. 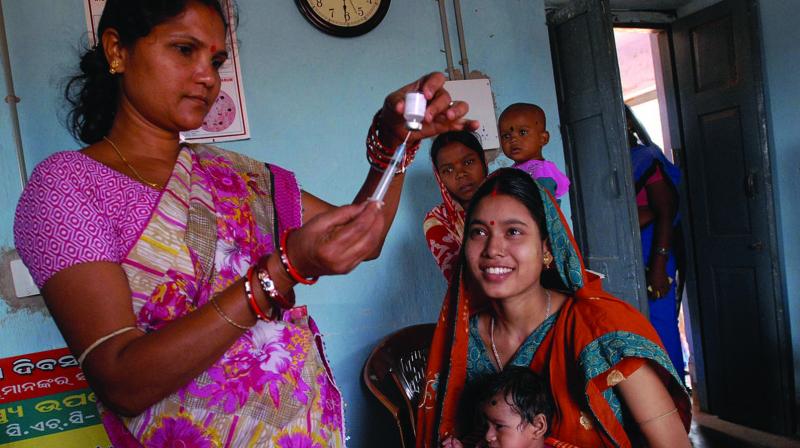 Illnesses are a severe risk, which takes a huge bite out of the earnings of the poor.

India’s economy is soaring and is now the world’s envy, but its healthcare system remains an Achilles’ heel. For millions of people, the high cost of treating illnesses continues to undermine economic progress. This is largely on account of India’s dilapidated healthcare system: a major symptom of the dire lack of funding. India ranks poorly in international rankings on most health indices.

With an investment of 1.3 per cent of GDP in health services — which has remained at the same level for a decade (the global average is 5.99 per cent) — India ranked 187th out of 194 countries according to the World Health Organisation (WHO) while accounting for a full 20 per cent of the global healthcare burden. Comparable rates are 1.5 per cent in Sri Lanka, 2.7 per cent in China, and 3 per cent in Thailand.

A recent heartening development is that the government has finally woken to the seriousness of India’s health crisis. In a major stride towards universal health coverage the government has announced the National Health Protection Scheme (NHPS), dubbed Modicare, which will insure 10 crore families for Rs 5 lakh each every year making it the largest public health scheme. If the government lives up to its high-minded pronouncements, the programme will be potentially life-changing and transformative for a country where affordable and safe healthcare is elusive to millions of families.

NHPS promises to bring healthcare system closer to the homes through 1.5 lakh health and wellness centres, as part of the “Ayushman Bharat” to address health holistically, in the primary, secondary and tertiary care system. However, this is not a new concept; only a fancy name has been used for our decade’s-old primary healthcare centres, which are planned to be upgraded to meet the new goal. The state’s past records in primary healthcare has been quite dispiriting. During the last 15 years India’s population grew 15 per cent but the number of village health centres, the front line of the public healthcare system, diminished by 8 per cent because they have fallen into disuse on account of lack of staff.

Illnesses are a severe risk, which takes a huge bite out of the earnings of the poor. Health financing poses an acute challenge in India. Many people have to take steep loans or sell their assets in order to pay. For the poor, losing wages while navigating the byzantine processes in public hospitals can be crippling. Healthcare expenses are a major cause of impoverishment of working families in India. Private healthcare’s catastrophic costs can shave off most of the hard-earned savings of patients and their families. Hence, they become a primary route to bankruptcy. The ministry of health has found that a quarter of all people hospitalised were driven to penury by their hospital costs, not including the cost of missed work. All these have damaging spillover consequences: money pulled from household savings for medical care means less to spend on food, education, housing and long-term plans. According to David Dror, who has closely observed health insurance in India: “A health event is a bigger risk to farmers than an unsuccessful crop. Once they sell their land or livestock, they become indentured labourers. That takes a generation to fix.”

The WHO has stated that 50-65 per cent of Indians do not have regular access even to essential medicines. This is ironic for a country which is regarded as the “world’s pharmacy”. India is the largest producer of generic medicines. The government must procure generic medicines in bulk and distribute them free of cost at public health centres to reduce financial and mental burden on the less privileged.

Though the healthcare facilities have grown significantly in terms of numbers and expertise, this has largely been in the private sector. The government hospitals appear to be crumbling as they remain woefully under-resourced, understaffed and poorly managed on account of which they are not able to deliver quality care. This has led to a rapid mushrooming of unregulated for-profit private providers, which today account for 93 per cent of all hospitals, up from 8 per cent in 1947, they account for 64 per cent of all beds and 80 to 85 per cent of all doctors. However, mass access continues to remain a challenge. For the private sector, affordability in Tier III cities and rural areas is a critical limiting factor for further expansion. A major problem is the vast disparity in healthcare access and delivery between the rich and poor and the urban and rural areas.

According to international consultancy KPMG, the number of healthcare personnel and infrastructure is highly disproportionate for India’s burgeoning population and voluminous disease burden. The country shares about 20 per cent of the burden of global diseases. However, in terms of global infrastructure share, India has only 6 per cent beds and 8 per cent doctors. In terms of public healthcare coverage, the statistics are horrific. There is one government doctor for every 10,189 people, one hospital bed for every 2,046 people, and one government-run hospital for every 90,343 people. These are certainly mind-numbing figures.

The poor prefer health insurance to life insurance, as they say “we die once but go to the doctor many times each year”. By hedging life’s uncertainties, they are in a position to protect the wealth they accumulate, generate more income, and can even get a fair chance to rescue themselves and their families out of the mire of poverty.

Non-communicable diseases (NCDs) — or chronic diseases — are the new challenge for India’s health sector. They are increasing at an alarming rate in rural India where the government-run healthcare system largely focuses on maternal and child health and infection. These are diseases of long duration and generally slow progression. The four main types of NCDs are cardiovascular diseases (like heart attacks and stroke), cancer, chronic respiratory diseases (such as chronic obstructed pulmonary disease and asthma) and diabetes. Unlike the largely short-term effects of communicable diseases, the dual health and economic impacts of non-communicable diseases on individuals, families and households are both devastating and long-lasting. It is estimated that India is likely to lose $4.58 trillion before 2030 due to NCDs.

The government needs to supplement curative services with preventive measures by strengthening ancillary civic services like insect management, water purification systems sewage systems and treatment of waste. Poor people are dying from diarrhoea, pneumonia, under nutrition, malaria tuberculosis and this is the result of poor hygiene and sanitation.

Finally India must revitalise the public health system to ensure access, outcome, quality and affordability. The focus must be on finding solutions, which are affordable, scalable and yet high quality. For a country which has a rich political history of broken promises, nothing sort of a sustained political will can help us to the goalpost.