According to party sources, Mr Shah will discuss the likely impact of the SP-BSP alliance in the 2019 Lok Sabha elections. 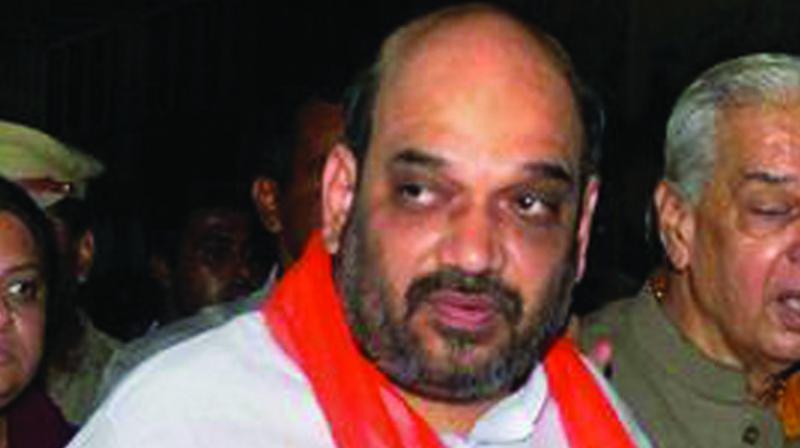 Lucknow: BJP president Amit Shah is likely to visit Lucknow next week. His Lucknow tour is expected to pave the way for major changes in the government and the party.

Mr Shah’s visit will be marked by a series of brain storming sessions through which the party president will assess the preparedness of the BJP to face the 2019 elections and also identify the irritants that have emerged in recent months.

According to party sources, Mr Shah will discuss the likely impact of the SP-BSP alliance in the 2019 Lok Sabha elections.

“We were caught unawares in the recent bypolls in Gorakhpur and Phulpur Lok Sabha seats but now we are making a seat to seat assessment  of the impact that the SP-BSP alliance could have” said a party functionary.

The party is planning to redefine its strategy for the general elections. The BJP is aware of the growing resentment among its dalit MPs on the issue of dilution of the SC/ST Act by the Supreme Court. BJP MP Savitri Bai Phule has already held a rally on the issue in which she spoke against her own party and BJP MP Udit Raj has also expressed his displeasure on the issue.

The BJP will now make all efforts to assuage the feelings of dalits who helped the BJP get a spectacular victory in 2014 and 2017 elections.

Mr Shah will also take a look at the BJP’s relationship with its allies, particularly the Suheldev Bhartiya Samaj Party (SBSP) that has been making a lot of noise lately. The SBSP has been issuing statements against the Yogi Adityanath government and two of its four legislators, and the party even cross voted in the recent Rajya Sabha elections.

SBSP president Om Prakash Rajbhar, who had air-dashed to Delhi on the eve of Rajya Sabha elections, was asked by Mr Shah to wait for his Lucknow visit to resolve his issues.

If sources are to be believed, the BJP is expected to give greater representation to dalits in the upcoming vidhan parishad elections that are to be held on April 26 for 13 seats.

Another major issue that will figure in the discussions with the BJP president will be the much-awaited cabinet reshuffle. Though chief minister Yogi Adityanath has already discussed this issue with the BJP chief in Delhi, a final decision in this regard will be taken in consultation with state leaders.

Mr Shah will also take time out to meet disgruntled legislators and hear their complaints about the bureaucracy.

“This visit of the BJP president is crucial since he is expected to address multiple issues this time and all these issues could have an impact on the general elections”, said the party functionary.