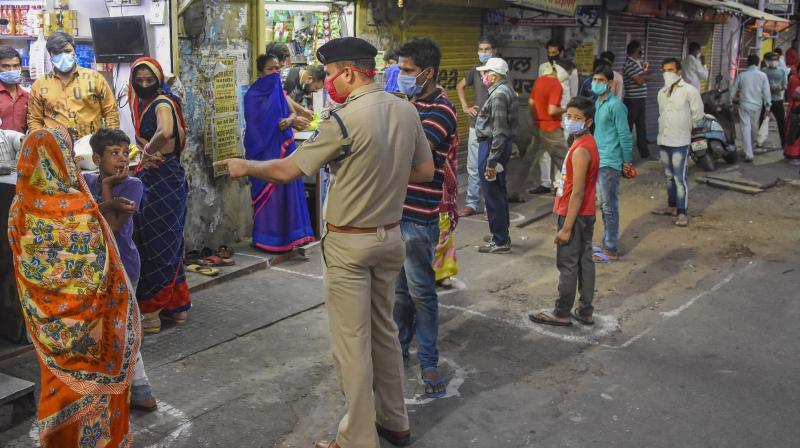 People stand in a queue at safe distance to buy grocery items from a shop during the nationwide lockdown imposed in wake of coronavirus pandemic, in Bhopal on Sunday. PTI photo

New Delhi: The death toll due to novel coronavirus rose to 109 and the number of cases in the country climbed to 4,067 on Monday, according to the Union Health Ministry.

While the number of active COVID-19 cases stands at 3,666, as many as 291 people were cured and discharged, and one has migrated, it stated. The total number of cases include 65 foreign nationals.

According to the ministry's data updated at 9 am, 21 fresh deaths were reported from Maharashtra, two each from Andhra Pradesh and Tamil Nadu and one from Punjab.

Maharashtra has reported the most coronavirus deaths at 45, followed by Gujarat at 11, Madhya Pradesh at nine, Telangana and Delhi at seven each, Tamil Nadu at five and Punjab at six.

Karnataka has reported four deaths, while West Bengal and Andhra Pradesh have recorded three fatalities each. Two deaths each have been reported from Jammu and Kashmir, Uttar Pradesh, and Kerala. Bihar, Himachal Pradesh and Haryana have reported one fatality each, according to the data.

The highest number of confirmed cases is from Maharashtra at 690, followed by Tamil Nadu at 571 and Delhi at 503. The number cases in Telengana has gone up to 321, in Kerala to 314 and in Rajasthan to 253.

Jammu and Kashmir has reported 106 cases, Haryana 84, West Bengal 80 and Punjab 68. Thirty people are afflicted with COVID-19 in Bihar, while Assam and Uttarakhand have reported 26 novel coronavirus cases each.

Odisha has 21 positive cases, Chandigarh 18, Ladakh 14 and Himachal Pradesh 13. Ten cases have been reported from the Andaman and Nicobar Islands, while Chhattisgarh has nine cases of the infection. Goa has reported seven COVID-19 cases, followed by Puducherry with five cases, Jharkhand three and Manipur two cases. Mizoram and Arunachal Pradesh have reported one infection each.

"State-wise distribution is subject to further verification and reconciliation," the Health Ministry said on its website.