PM calls CMs ahead of key phase in corona battle 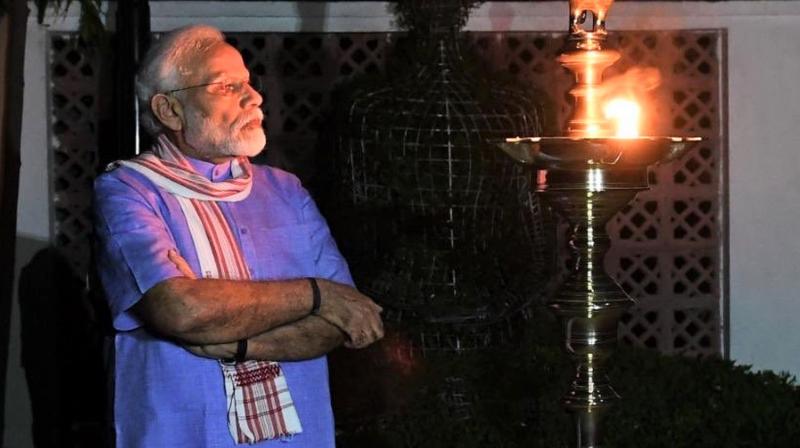 An image posted by prime minister Narendra Modi on his Twitter account after he lit a lamp as a symbol of the nation's battle against the coronavirus. (Twitter)

Hyderabad: Yesterday, Sunday, before he lit a lamp, prime minister Narendra Modi telephoned the chief ministers of Telangana and Andhra Pradesh. Such calls from the PM to CMs have grown in frequency and thus indicate his urgency as he seeks to give them guidance on tackling the Covid-19, now in its most threatening phase.

But with the two Telugu states, such calls by the PM have something of the quality of a parent telephoning a son at university -- a request for money, “to buy books”, is never far away. The two Telugu-speaking states are so desperately broke –Andhra Pradesh perpetually and Telangana recently—that they have both taken the unprecedented action of slashing the salaries of even legislators.

So despite the fact that New Delhi only late last week released funds from the State Disaster Relief Fund (SDRF) to both Andhra Pradesh and Telangana, Y S Jagan Mohan Reddy presented to the prime minister a long list of projects awaiting devolution of funds from the Centre, totalling something like Rs 7000 crore.

While thanking the PM for releasing funds under the revenue deficit grant (only to AP) and state disaster risk management funds (to several states), Jagan Mohan Reddy presented to Modi an impressive litany: the Centre has yet to release Rs 2100 crore for the Polavaram project as reimbursement for bills borne by the state government; Rs 2200 crore for the Civil Supplies Department; Rs 1100 crore for local bodies; Rs 1050 crore for the Backward Areas Development Fund for four Rayalaseema and three north costal districts; and Rs 900 crore as GST compensation.

According to officials in the AP admin, Modi told Jagan: "I will take necessary steps."

On the coronavirus front, both chief ministers expressed to the PM their optimism that come April 8, the curve will start flattening out. This is really optimistic because, fresh cases of the coronavirus infection have in fact spurted in both states in the past few days.

On Sunday, when the conversation took place, Telangana had 290 coronavirus positive cases and 11 deaths registered. In AP, the count was sharply up to 262 positive and two deaths.

In the case of K Chandrasekhar Rao, this optimism was in line with the exuberance he affected two Saturdays ago, that come April 7, no less than 26,000 people would have left quarantine wards, cured and healthy.

In other words, both chief ministers have adopted the Tablighi Jamaat narrative of the central government to explain why the coronavirus epidemic has not yet been controlled, and may spiral out of control.

This narrative goes like this: In the beginning the two administrations concentrated on foreign returnees and were on top of the game. But then, the Tablighi Jamaat marred the script by congregating in Delhi and then fanning out all over the country. That took the Covid-19 virus into unanticipated places, and the number spurt seen in the past week are nearly entirely due to that.

At present most of the coronavirus positive cases coming to light are Tablighi Jamaat returnees or contacts. Both CMs expressed the hope that when the 14-day quarantine period passes, and no more new cases come up, then the state would have emerged in the clear from this epidemic.

Jagan Mohan Reddy suggested to the PM that after April 14, when the current three-week lockdown will end, it would be advisable not to resume trains for a few more days. So also cinema theatres.