A huge team of central forces had to be deployed in the area as the locals protested, alleging malpractices 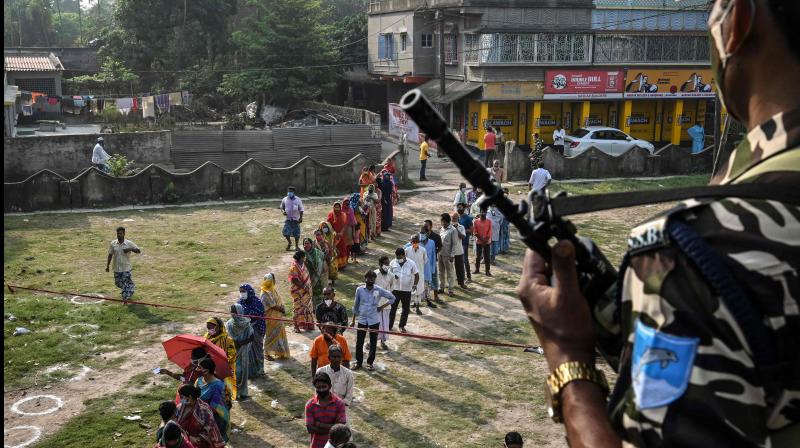 A paramilitary personnel stands guard as people wait to cast their votes at a polling station during the state legislative elections, at South Twenty Four Parganas district, about 70 km from Kolkata on April 6, 2021. (Dibyangshu Sarkar / AFP)

Uluberia (WB): Four EVMs and a similar number of VVPATs were found at the house of a Trinamool Congress leader in West Bengal's Howrah district, following which a poll official was suspended, a senior officer said on Tuesday.

The incident happened in Tulsiberia village in the Uluberia Uttar assembly segment, he said.

Villagers spotted a vehicle with an Election Commission sticker outside the house of the TMC leader in the early hours, after which they started protesting, he added.

Then, it was found that the officer of sector 17 Tapan Sarkar was visiting the TMC leader's house with the EVMs, the official said.

The EVMs and VVPATs were seized and the officer suspended, he said.

"The four machines are not being used in today's polling. We have sought a report from the District Election Officer," he added.

The sector officer claimed that he reached the area very late and found the polling booth closed, following that he decided to spend the night at his relative's residence, unable to find any "safe place" to stay.

A huge team of central forces had to be deployed in the area as the locals protested, alleging malpractices. Even the Block Development Officer (BDO) was gheraoed when he had reached the spot to pacify the crowd.

BJP candidate Chiran Bera alleged that the incident was part of TMC's plan to rig the election, a charge denied by the ruling party.

BJP state president Dilip Ghosh said, "This is an old habit of the TMC. It takes time to get over the old habits. They have been caught red-handed and it shows what they are up to."

Polling was underway in the area in the third phase of elections.