AICC general secretary Mr Scindia is pitted against K. P. Yadav of BJP in Guna, which is going to Lok Sabha polls on May 12. 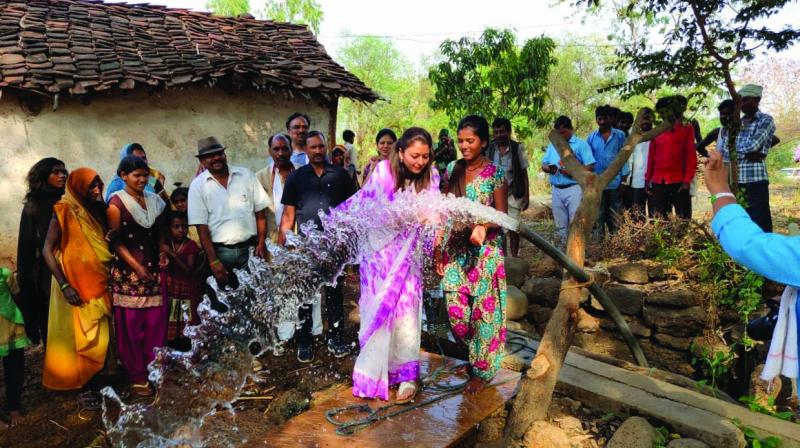 Priyadarshini Raje Scindia drinks water from a tubewell at a village.

Guna (Madhya Pradesh): The searing heat and the dusty roads of rural Guna in MP seemed to have hardly bothered Priyadarshni Raje Scindia as she covered village after village in the arid region to campaign for her husband and four-time MP Jyotiraditya in the Lok Sabha constituency.

Priyadarshni was seen “amazingly” as comfortable as she has been in her majestic palace while mingling with rural folk in the villages being oblivious to the scorching heat.

Her calm and composed demeanor as well as warm-heartedness has earned her the sobriquet of “common man’s Maharani” in the region.

“Maharaja (Mr Scindia) has been working tirelessly for the last 17 years for the development of your area. Relation between people of the region and my family is quite old. Please strengthen hands of Maharaja by casting your votes for him in the election,” she appealed to a gathering of women while sitting with them under a tree in the village of Karmasi under Ashok Nagar district falling under Guna Lok Sabha constituency.

She later proceeded straight to agriculture fields of Kushwaha, a local farmer, to quench her thirst from his tube well, like one among them.

“We had never seen Maharani in the village. I feel elated when she took water from my tube well”, Kushwaha said.

“Ms Scindia had earlier been working behind the scenes as a strategist in every election for her husband. She has emerged out of the palace involving herself in the campaign actively for the first time in this election after Mr Scindia was made in-charge of elections in Uttar Pradesh (west) by the party to make up for his absence during the period”, Congress spokesman Pankaj Chaturvedy said.

“She has been receiving huge response wherever she goes in the constituency”, a local party worker said.

Cladded in a simple cotton sari and without any make up, Ms Scindia lacked sophistication of a “Maharani”  in her appearance , thus encouraging villagers particularly women to mingle with her freely.

She was also seen striking chords with youths easily by playing tennis and badminton with them .

AICC general secretary Mr Scindia is pitted against K. P. Yadav of BJP in Guna, which is going to Lok Sabha polls on May 12.