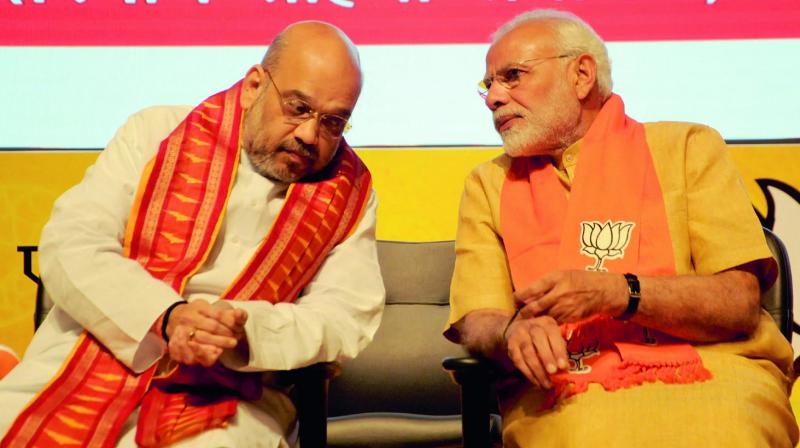 'Ties between the people and the BJP have snapped...for the BJP, relationships are business calculations,' an editorial in 'Saamana' proclaimed today. (Photo: File | PTI)

Mumbai: It was not a warm welcome for BJP president Amit Shah who travelled to Mumbai from Delhi to meet Shiv Sena chief Uddhav Thackeray on June 6.

Hours ahead of BJP chief’s meeting with Uddhav Thackeray on the evening of June 6, Shiv Sena’s mouthpiece, ‘Saamana’, has named Amit Shah and Prime Minister Narendra Modi as wilful defaulters in ally management.

Amit Shah is in Mumbai specifically to assuage Uddhav Thackeray who has been targeting and criticising the BJP though they run Maharashtra together.

"Ties between the people and the BJP have snapped...for the BJP, relationships are business calculations," an editorial in 'Saamana' proclaimed on Wednesday.

Also Read: No tie-up with BJP, will contest 2019 Lok Sabha elections on our own: Shiv Sena

It is not just Uddhav Thackeray who is feeling slighted by the BJP. However, he is the only one who has been vocal and said he will not be a part of its national coalition for the 2019 Lok Sabha election. Other members of that league, like the Akali Dal and Bihar Chief Minister Nitish Kumar, have indicated they want a more even-handed approach and respect from the BJP, frequently accused of treating its partners as dispensable, secure in its own might - when Prime Minister Narendra Modi was elected in 2014, his party had enough seats to form the government on its own without any help from its partners.

In March, Andhra Pradesh Chief Minister Chandrababu Naidu hit out at the Prime Minister's coalition government, alleging that he had been insulted by Narendra Modi who refused to meet him to discuss his demands for special financial assistance for Andhra Pradesh.

Shiv Sena contested a recent by-poll in Maharashtra against the BJP. The Palaghar seat was retained by the BJP, though by a narrow margin of 30,000 votes.

The election was part of 11 assembly and 4 parliamentary seats that saw the BJP winning just two. In March, BJP lost two prestige seats in Uttar Pradesh, the state that determines who governs India because it elects as many as 80 members of parliament.

A worried Amit Shah has quickly lined up a series of visits to its alliance to ensure ties remain firm and intact ahead of the general election, especially crucial at the moment as the opposition is making a concerted attempt to come together to oust Prime Minister Narendra Modi.

A united opposition which consists of different voter group with varied ideologies is being viewed as the only way that non-BJP parties have any chance at defeating PM Modi in 2019 polls.

In Karnataka last month, the Congress quickly accepted junior partner status and allowed regional leader H D Kumaraswamy to become the Chief Minister so that the BJP could not form the government in the state.

"Why is Amit Shah meeting NDA allies after losing by-elections?" 'Saamana' asked today. "In 2019, the Shiv Sena will fight alone," it asserted.  However, Sena's own strength in Maharashtra has not been inarguable. It struggled to hold onto Mumbai's municipal corporation, a hugely rich body that it has controlled for two decades. The BJP was just two seats behind. The BJP also won a series of local bodies in other parts of the state.