As part of BJP's 'Sampark se Samarthan' campaign, Shah briefed her about the achievements of the Modi government in the last four years. 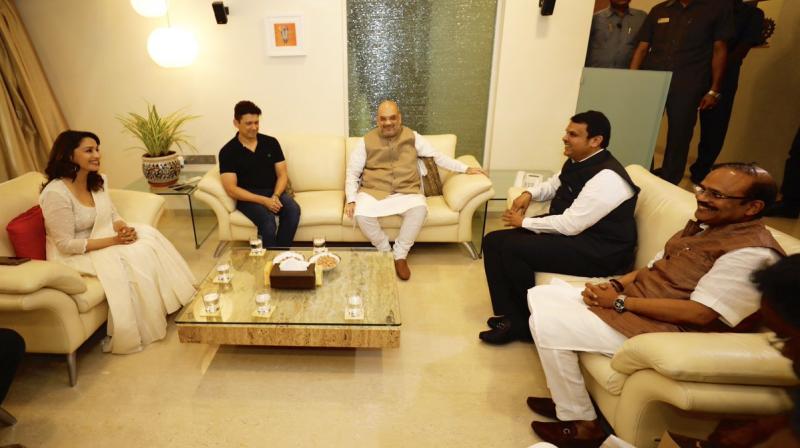 The meeting lasted for around 40 minutes and took place at Madhuri Dixit's suburban residence in Mumbai. (Photo: Twitter | @AmitShah)

Mumbai: BJP president Amit Shah on Wednesday called on actress Madhuri Dixit here as part of his party's "Contact for Support" campaign and briefed her on the achievements of the Narendra Modi government.

Shah, along with Maharashtra Chief Minister Devendra Fadnavis and other BJP leaders, met Dixit at her residence in suburban Mumbai as part of the saffron party's "Sampark se Samarthan" (Contact for Support) campaign. During the meeting that lasted for around 40 minutes, Shah presented a booklet containing the achievements of the BJP-led central government in the last four years to the Bollywood icon.

Dixit's husband Sriram Nene, a surgeon, was also present during the meeting. "It was pleasant meeting the noted bollywood actress @MadhuriDixit and Dr. Shriram Nene as a part of "Sampark For Samarthan" initiative at their home in Mumbai, Maharashtra. Have discussed the achievements and path breaking initiatives of PM @narendramodi govt in last 4 years (sic)," Shah tweeted.

It was pleasant meeting the noted bollywood actress @MadhuriDixit and Dr. Shriram Nene as a part of "Sampark For Samarthan" initiative at their home in Mumbai, Maharashtra. Have discussed the achievements and path breaking initiatives of PM @narendramodi govt in last 4 years. pic.twitter.com/slBh5mXAf6

He did not speak to the reporters who had assembled outside Dixit's residence in Juhu. Earlier, upon his arrival in the city, Shah had a brief meeting with Fadnavis, Maharashtra BJP president Raosaheb Danve, Education Minister Vinod Tawde and BJP general secretary (organisation) Vijay Puranik at Rangsharda auditorium in suburban Bandra.

The BJP president is scheduled to meet legendary singer Lata Mangeshkar and industrialist Ratan Tata at their respective residences later in the day as part of the campaign that has been launched by the saffron party in the run-up to the 2019 Lok Sabha polls.

As part of the mega public drive, 4,000 BJP functionaries will contact one lakh people, who are well known in their respective fields, to spread the word about the NDA government's programmes and policies launched since 2014.

Shah will himself meet 50 people as part of the campaign, the party had said earlier. The BJP chief is also scheduled to meet Shiv Sena president Uddhav Thackeray in the evening.

Meanwhile, today's editorial in Sena mouthpiece "Saamana" has made a scathing attack on the BJP's "Contact for Support" drive.

Launching the campaign, Shah had met former Army chief Dalbir Singh Suhag and former Lok Sabha secretary general Subhash Kashyap on May 29. He has also met cricket legend Kapil Dev, former chief justice of India R C Lahoti and yoga guru Ramdev, who is associated with the Patanjali group of companies, as part of the campaign.

Shah had earlier said the campaign was aimed at informing the people about various initiatives of the government, which have resulted in raising their living standards.