India   All India  06 Jun 2018  Whichever alliance it may be, I have worked the same way: Nitish Kumar
India, All India

Whichever alliance it may be, I have worked the same way: Nitish Kumar 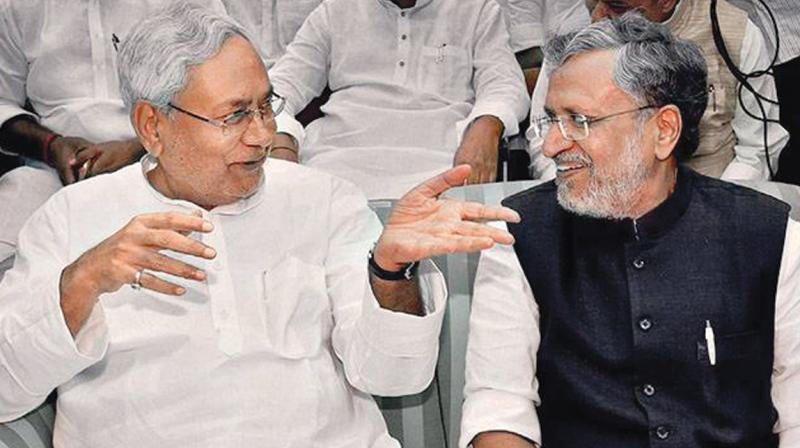 Bihar Chief Minister and Janata Dal (United) leader Nitish Kumar also spoke about his party's defeat in last month's bypolls in Jokihat, insisting that he had always worked hard for all communities of Bihar and did not care if they voted for him. (Photo: PTI)

Patna: Ten months after aligning with alliance partner BJP, Bihar Chief Minister and Janata Dal (United) leader Nitish Kumar offered his defence and a stinging rebuttal to his critics who have been targeting him for switching sides and signing up with the BJP.

Nitish Kumar in his defence said that there had been consistency and continuity in his decisions over the nearly 12 years that he had been the chief minister of Bihar irrespective of who his alliance partners were.

Nitish Kumar also spoke about Janata Dal United's defeat in last month's bypolls in Jokihat, insisting that he had always worked hard for all communities of Bihar and did not care if they voted for him.

“In Jokihat, I did not even ask for votes... I told people that my work is before you. If you want to vote on work then please vote for Janata Dal United,” Nitish Kumar said about the seat that the Rashtriya Janata Dal (RJD) led by former deputy chief minister Tejashwi Yadav had wrested from the JD(U).

This was the RJD's third success after Nitish Kumar walked out of the ‘mahagathbandhan’ or grand alliance with the RJD and Congress, and quickly teamed up with the BJP to continue as the Chief Minister. The JD(U) had lost the last two by-elections in Jehanabad and Araria.

It is not that Nitish Kumar, did not try to win Jokihat in east Bihar. He had deployed half his cabinet in Jokihat and addressed a public meeting in the fag end of the election campaign, promising voters special attention if they voted JD(U) candidate Murshid Alam.

The JDU candidate, who has seven criminal cases registered against him including one of rape, lost the election by a margin of 40,000 votes.

Some analysts have suggested that a large number of Muslims did not vote for the JD(U) candidate because Nitish Kumar had formed an alliance with the BJP.

Addressing to the Muslim community at JD(U) event on Tuesday, Nitish Kumar referred to this perception as well.

"Who you voted to, I don't have anything to do with it... It is your wish... We worked and will keep on working. But tell me, where did we compromise (with your interests)," the Bihar Chief Minister asked.

Nitish Kumar underlined that he had stood by his vision for the state and consistently drawn up and implemented policies for the welfare of all communities since November 2005 when he started out as the chief minister.

From 2015, the chief minister said, he had started out working on the 'Saat Nischay' (seven resolves) programme and was still working on them.  The "seven resolves" programme is seen as an effort to reach amenities to people including clean drinking water, electricity, toilets and better access to higher education.

Nitish Kumar's message was that he had been steadfastly working for the state's development and it really did not matter who his alliance partners were. "Whichever alliance it may be... I have worked the same way," he said.

"When I was there, you asked the maximum questions... about zero tolerance to corruption... And still, when I split on the point of zero tolerance," Nitish Kumar said, defending his decision last July to divorce the grand alliance and reboot his partnership with the BJP.

According to his former partners the RJD and Congress, their alliance got a massive mandate in the 2015 assembly elections on an anti-BJP plank and so Nitish Kumar's decision to partner with the BJP is unethical.