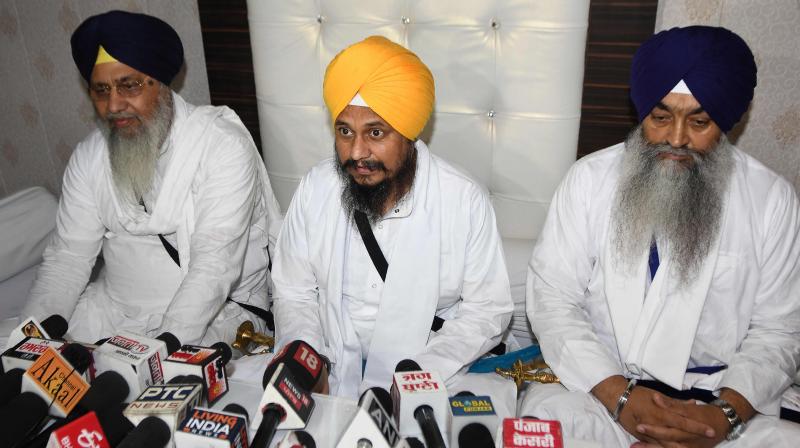 The head priest of the Akal Takht, Giani Harpreet Singh (centre) and Shiromani Gurdwara Parbandhak Committee president Gobind Singh Longowal (left) speak to the media persons after offering prayers on the 36th anniversary of Operation Blue Star at the Golden Temple in Amritsar on June 6, 2020. The Indian military's June 1984 assault on the Golden Temple in Amritsar, called Operation Blue Star, was aimed at flushing out militants holed up inside demanding an independent Sikh homeland. The struggle culminated in the deadly storming of the Golden Temple, Sikhism's holiest shrine. (AFP)

Amritsar: The jathedar of the Akal Takht, Giani Harpreet Singh on Saturday suddenly turned the nation's attention to the issue of a separate country for the Sikhs by saying that if the government offered it, the Sikhs would be glad to take it.

The Akal Takht is the the highest temporal seat of the Sikhs. Jathedar Harpreet Singh  was talking to the media here on the 36th anniversary of Operation Bluestar, which was carried out in 1984 to flush out militants holed up in the Golden Temple.

Asked if the demand for Khalistan was justified, Harpreet Singh said, "If we get it, then what else do we need?"

"If the Government of India offers it, then we will accept it. Which Sikh in the world does not want it?"

Shiromani Gurdwara Parbandhak Committee (SGPC) president Gobind Singh Longowal also endorsed the views of the Akal Takht Jathedar and said that if Khalistan is given to the community, it would be acceptable to Sikhs.

To a question on pro-Khalistan slogans raised at the Golden Temple complex, Harpreet Singh said, "There was nothing wrong in it. But they should have done it after the conclusion of the religious programme which was in progress at the Akal Takht."

Earlier in the day, pro-Khalistan slogans were raised in the premises of the Golden Temple here to mark the 36th anniversary of Operation Bluestar.

Around 100 Sikh activists led by Imaan Singh Mann, son of the president of the Shiromani Akali Dal (Amritsar) and former MP Simranjit Singh Mann, raised pro-Khalistan slogans at the Akal Takht on Saturday.