1 Amarnath pilgrim dies, 15 are injured in LPG blast inside bus

The injured pilgrims were rushed to a nearby medical facility by the locals. 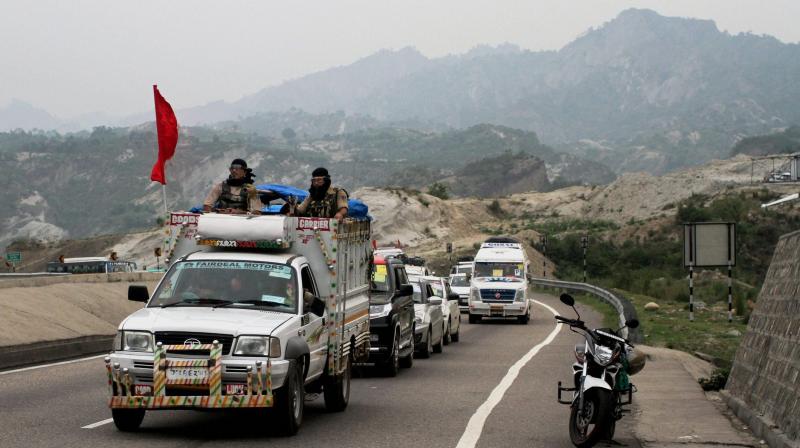 A security vehicle escorts the first batch of Amarnath pilgrims, on way to the holy shrine, at Jammu-Srinagar national highway near Jammu. (Photo: PTI)

Srinagar: One Amarnath pilgrim was killed and fifteen others received burn injuries after an LPG cylinder exploded inside the bus they were travelling in through Jammu and Kashmir's southern Anantnag district on Thursday.

The injured pilgrims were rushed to a nearby medical facility by the locals. The critically injured were later referred to Anantnag's district hospital.

A statement issued by the police here while confirming it said that nine of the injured pilgrims are being treated at Emergency Hospital Qazigund, the gateway to Kashmir Valley from the south. “Seven others were shifted to Anantnag hospital where one was of them identified as Ganga Warm, a resident of Ganesh Nagar, Andhra Pradesh, succumbed to his injuries”, the statement added.

The police said that the blast occurred inside the bus bearing registration number UP38 AT- 0909 at Vessu along the Jammu-Srinagar highway and about 67-km from here on Thursday afternoon.

Meanwhile, the Shri Amarnathji Shrine Board (SASB) officials said that as many as 105, 380 devotees have paid obesiance at the 12,729-foot-high cave-shrine in the Kashmir Himalayas, so far. The 40-day yatra began on June 29.