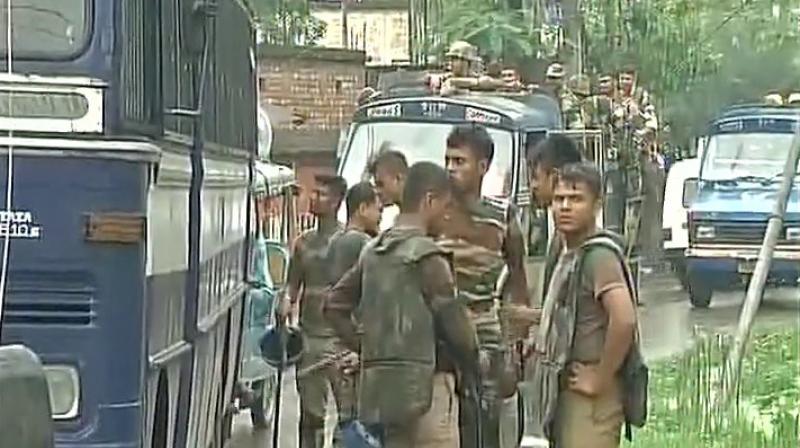 Kolkata: One person reportedly died at a Kolkata hospital on Thursday morning while being treated for injuries he sustained during the continuing communal clashes in Basirhat over an ‘objectionable’ Facebook post, West Bengal.

Fresh violence was reported in Basirhat after section 144 was imposed in the area and protesters have blocked the road. Tear gas shells were used to disperse the crowd. The clashes had erupted on Tuesday.

Meanwhile, the RSS claimed the victim was their party worker.

RSS (South Bengal) secretary Jishnu Basu on Thursday said that the victim, Kartick Ghosh, 65, was a BJP worker from the RSS wing for the last two decades.

"Kartickda owned a tea stall on Basirhat-Taki Road. For the last few days Trinamul Congress backed miscreants have been rioting and looting in the area while the police has been a mute spectator. At around 3 pm on Wednesday when another round of attack unfolded Kartickda was at his teastall while all others fled. He tried to protect his stall. The miscreants dragged out him on the road and chopped him. Kartickda was fatally injured," Basu told DC.

Basu added that Ghosh was later rescued and was rushed to Barasat District Hospital from where the injured man was referred to RG Kar Medical College in north Kolkata at night.

He alleged that Trinamool Congress workers prevented the state BJP leaders to see the body.

Security at the hospital has been increased following the news of his death.

BJP leader Locket Chatterjee, who tried to visit the injured man in hospital, was "heckled and chased away" by supporters of the ruling TMC.

Violent clashes broke out in Baduria and Basirhat areas of North 24 Parganas in West Bengal over the Facebook post. Several shops were torched and houses were ransacked in Baduria, Tentulia and Golabari.

On Monday night, the Baduria police station was attacked and set ablaze. Superintendent of Police (North 24 Parganas) Bhaskar Mukherjee was also injured when an angry mob attacked him and burnt his vehicle.

The Centre has already deployed 400 paramilitary personnel in Baduria.

To ease the situation, Section 144 was imposed in violence-hit areas on Wednesday and internet services were also withdrawn to prevent rumours from spreading.

The Union Home Ministry has sought a report from the West Bengal government over the communal clashes.

The main accused, who allegedly posted objectionable material on Facebook on Sunday, was arrested on Monday morning and remanded to police custody for four days.

However, this did not calm members of the protesting community and they resorted to violence and torched the home of the accused.

West Bengal Chief Minister Mamata Banerjee has appealed the warring groups to maintain peace and communal harmony in the area. She also held the local police responsible for failing to block Facebook as soon as trouble started.