The MEA had announced that 883 pilgrims, who had been stranded, have been evacuated from Simikot to Surkhet and Nepalganj. 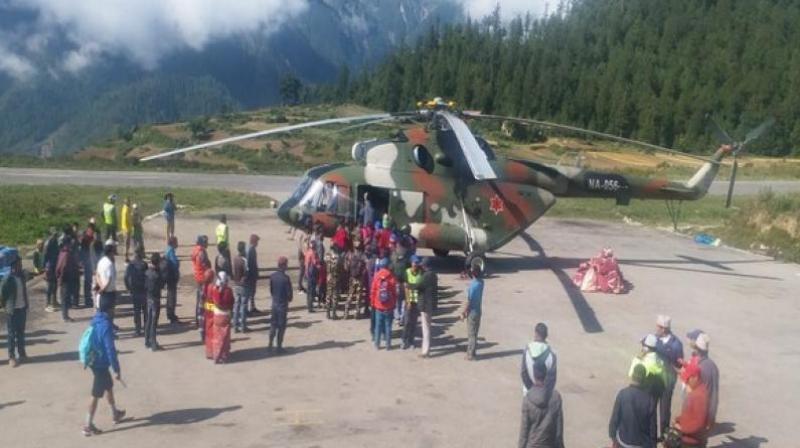 Kathmandu: The Indian Embassy in Kathmandu has confirmed that the evacuation of the Kailash Mansarovar Yatra pilgrims in Nepal is almost over and that everything is in "total control."

"I hope your relatives are now out danger. It has been a very difficult evacuation process but now almost over and we are in total control," First Secretary (Consular) Embassy of India, Kathmandu Pranav Ganesh said.

"We would like to apologise for any inconvenience caused during our operations but we couldn't have singled out one person for evacuation at other's expense," he added.

On Thursday, the Ministry of External Affairs (MEA) had announced that 883 pilgrims, who had been stranded due to inclement weather, have been evacuated from Simikot to Surkhet and Nepalganj in the last three days.

The representatives organised a medical checkup of all elderly and ailing pilgrims to ensure their well-being and established contacts with most of them to assure them that the mission was aware of the situation and would take necessary action for their rescue.

It also urged all tour operators to keep their pilgrim batches in Tibet so that the crisis is not exacerbated due to returning pilgrims.

Further, the Mission operated seven buses to ferry all pilgrims from Surkhet to Nepalganj by road. The Mission has deployed a private MI-16 Helicopter on charter to pull out additional 20-25 pilgrims in one sortie. The helicopter might do two-three sorties.

Separately, it operated 55 sorties between Hilsa and Simikot and evacuated 275 pilgrims in Hilsa. A number of Kailash Mansarovar Yatra pilgrims are stranded in parts of Nepal following a heavy downpour in the last few days.

Thousands of Indian pilgrims take part in the Kailash Mansarovar Yatra every year via Nepal in the Tibetan Autonomous Region of China ahead of the monsoon season.

The tour is organised by the Ministry of External Affairs each year between June and September, in cooperation with the government of People's Republic of China through two different routes - Lipulekh Pass (Uttarakhand) and Nathu La Pass (Sikkim).