India   All India  06 Jul 2019  Ramani's tweets were not meant to raise awareness on sexual harassment: Akbar
India, All India

Ramani's tweets were not meant to raise awareness on sexual harassment: Akbar

The court has posted the matter for cross-examination of Akbar's witness for July 15 and 17. 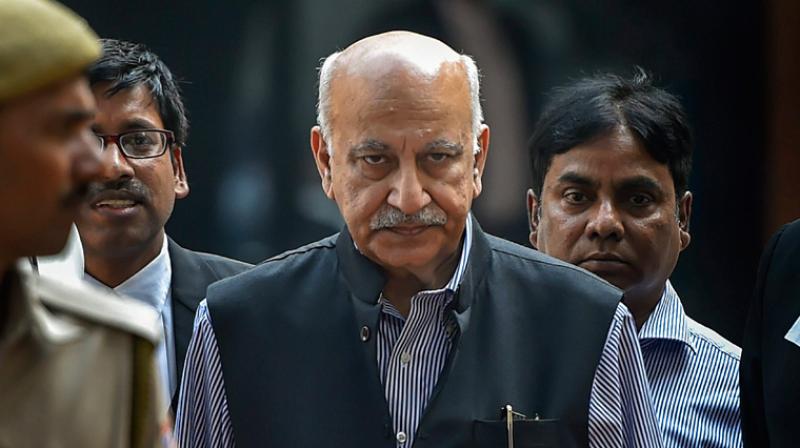 'It is wrong to suggest that the articles and tweets of Priya Ramani were meant to raise awareness of pervasiveness of the issue of sexual harassment at the workplace,' Akbar said. (Photo: File)

New Delhi: Former Union Minister MJ Akbar on Saturday stated in a Delhi court that it is wrong to suggest that the articles and tweets of journalist Priya Ramani were meant to raise awareness regarding the issue of sexual harassment at the workplace.

Akbar, who appeared before Additional Chief Metropolitan Magistrate Samar Vishal for his cross-examination in connection with a defamation case filed by him against Ramani, said in court, "It is wrong to suggest that the articles and tweets of Priya Ramani were meant to raise awareness of pervasiveness of the issue of sexual harassment at the workplace."

He added, "It is also wrong to suggest that Ramani's disclosures in her tweets and articles relating to him were true and made in good faith for public interest and for public good."

Claiming that he had no intention to target Ramani by filing a defamation case in the matter against her, he said, "It is wrong to say that present complaint I filed is false and without merit and that I have been selective in filing this complaint against Priya Ramani in order to target her."

"I worked with a journalist Pallavi Gogoi in 1994 at Asian Age. I was made aware of an article Mark-M written by Pallavi Gogoi in the Washington Post dated 01.11.2018. But I deny all those allegations. It is a matter of public record that on 02.11.2018, I released a statement to ANI in relation to the allegations made by Pallavi Gogoi. It is correct that my wife has also released a statement to ANI from portion A to A on 02.11.2018," Akbar said in response to a question put forth by Ramani's counsel, senior advocate Rebecca John.

The court has posted the matter for cross-examination of Akbar's witness for July 15 and 17.

Ramani had on April 10 pleaded not guilty before the court and claimed trial after the court framed defamation charges against her on a criminal complaint of Akbar.

In one of the past hearings, the ACMM had also granted a permanent exemption to Ramani from personal appearance in the hearings to follow.
I

n February, Ramani was granted bail on a personal bond of Rs 10,000. She was the first woman to accuse Akbar of sexual harassment during the #MeToo campaign.

Akbar had filed a defamation case against the journalist for accusing him of sexual misconduct. The allegations levelled against him forced him to resign from the Union Cabinet on October 17, 2018.