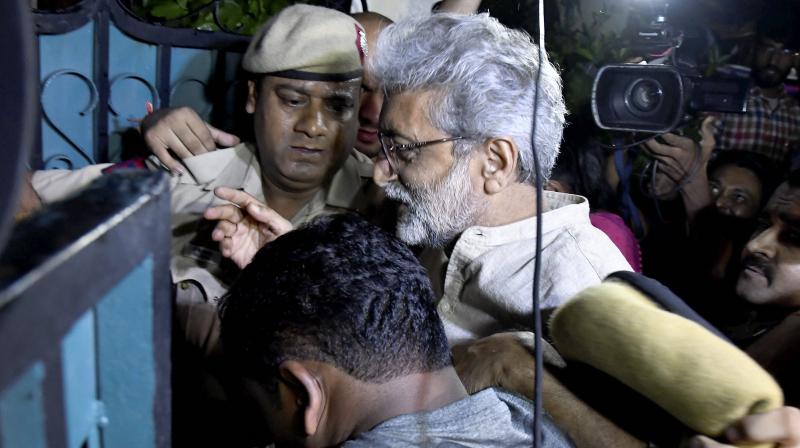 SC sets aside the Delhi High Court order asking the NIA to produce judicial records on transfer of civil rights activist Gautam Navlakha from Delhi to Mumbai in connection with the Bhima Koregaon case. (PTI Photo)

New Delhi: The Supreme Court Monday sets aside the Delhi High Court order asking the NIA to produce judicial records on transfer of civil rights activist Gautam Navlakha from Delhi to Mumbai in connection with the Bhima Koregaon case.

A bench of Justices Arun Mishra, Navin Sinha and Indira Banerjee said that the Delhi High Court had no jurisdiction in entertaining Navlakha's bail plea and held that courts in Bombay had the jurisdiction in the case.

The top court also expunged adverse remarks of the Delhi High Court against the National Investigation Agency (NIA) made in its May 27 order while dealing with the bail plea.

The apex court had earlier stayed the May 27 order of the Delhi High Court by which the NIA was pulled up for acting in haste in taking away Navlakha from Tihar Jail to Mumbai.

The Delhi High Court on May 27 had pulled up the NIA for acting in unseemly haste in taking away Navlakha from the national capital to Mumbai even when his interim bail plea was pending here.

During the hearing on Monday, Solicitor General Tushar Mehta, appearing for NIA, said that at the time when Navlakha surrendered in pursuance to top court order, Delhi was under lockdown.

He said that NIA later moved the Mumbai trial court and requested for issuance of production warrant as Navlakha was in judicial custody at Tihar Jail.

He added that Navlakha was produced before the trial judge in Mumbai based on the production warrant and the Delhi High Court was duly informed about it during the hearing.

Mehta pointed out that after the lockdown was lifted, Navlkaha was taken to Mumbai and the observations made by the Delhi High Court were totally uncalled for.

Senior advocate Kapil Sibal, appearing for Navlakha said, What the HC has done? It has neither granted any bail nor any relief. High Court simply asked the concerned officer to file an affidavit.

However, the bench said that Delhi High Court should not have entertained the matter.

How any HC could have interfered in the matter like this? the bench told Sibal, adding, You could have come to us (SC) or go to the concerned NIA court in Mumbai.

The top court on June 19, had expressed unhappiness and questioned the Delhi High Court's decision to entertain the bail plea of Navlakha, when it had already dismissed his petition for similar relief and asked him to surrender within a specific date.

Navlakha was arrested in August 2018 by the Pune Police from his Delhi residence in connection with the violence at Koregaon Bhima village in Pune district on January 1, 2018.

Navlakha, Teltumbde and several other activists have been booked by the Pune Police for their alleged Maoist links and several other charges following the violence at Koregaon Bhima village in Pune district on January 1, 2018.

All the accused have denied the allegations.

According to Pune Police, "inflammatory" speeches and "provocative" statements made at the Elgar Parishad conclave held in Pune on December 31, 2017 had triggered caste violence at Koregaon Bhima the next day.

The police alleged that the conclave was backed by Maoists.