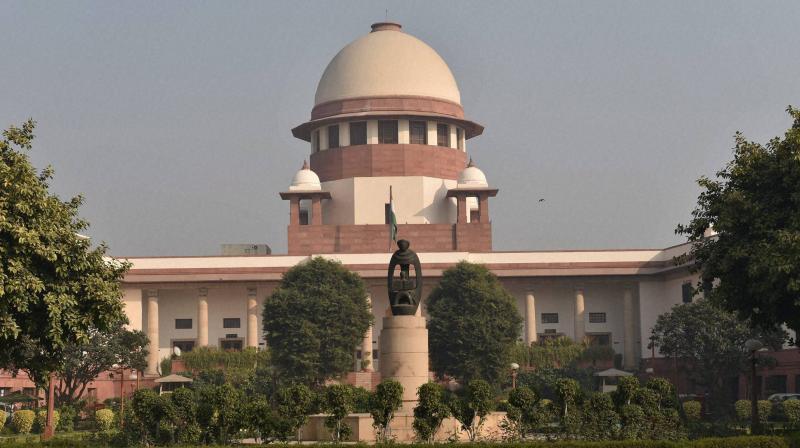 New Delhi: The Supreme Court Monday dismissed a plea alleging bias in listing of cases by its registry officials and imposed a fine of Rs 100 on a lawyer for filing such a petition.

A bench comprising Arun Mishra and S A Nazeer said it was dismissing the PIL filed by lawyer Reepal Kansal and was imposing a cost of Rs 100 on him for filing such a petition.

Kansal said that due to technical glitches, the bench couldn't pronounce its judgement via video conference and apprised of its verdict telephonically.

The lawyer said that the court has held that the allegations had no basis.

The PIL alleged that preference in listing of cases are being given to influential lawyers/petitioners.

The top court, on June 19, had reserved its verdict on the PIL seeking a direction to its registry officials not to give preferences to cases filed by influential advocates or litigants in listing before benches at the challenging times when virtual courts are functioning due to prevailing COVID-19 pandemic.

During the hearing, the top court had expressed unhappiness over the plea saying the apex court's registry has been working "day-and-night" for the benefit of litigants as well as advocates.

"The registry is working day-and-night for you people this has become a trend," the bench had said.

The plea had also sought a direction to the apex court's Secretary General and other officials to stop discrimination against not-so-influential lawyers.

The plea said there was no mechanism to address complaints against erring officers of the registry who favour some law firms/advocates for reasons best known to them.

It also sought direction to the officials concerned not to point out unnecessary defects in cases of ordinary advocates/petitioners and refund the excess court fee and other charges.