India   All India  06 Aug 2017  From putting up party posters to VP-elect, Naidu comes a long way
India, All India

From putting up party posters to VP-elect, Naidu comes a long way

As an ABVP activist during the Emergency, Venkaiah Naidu was arrested and jailed. 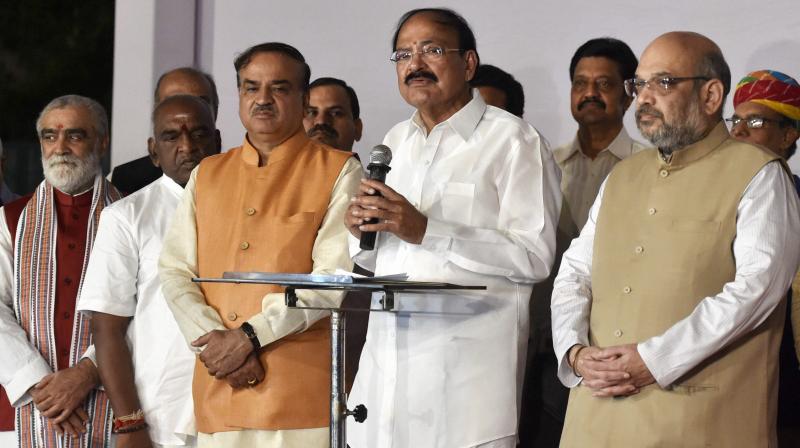 New Delhi: Famous for his witty one-liners and affable nature, former BJP president M. Venkaiah Naidu, 68, elected as the next Vice-President, will take oath on August 11.

Coming from a humble background, Mr Naidu’s association with the BJP goes back to its former avatar, Jana Sangh. In those days Mr Naidu used to put up posters of leaders like Atal Behari Vajpayee and L.K. Advani. As an ABVP activist during the Emergency, Mr Naidu was arrested and jailed.

A prominent political figure in national politics from the south, Mr Naidu is among few Indian politicians who has friendships cutting across party lines. Perhaps this virtue of his was a consideration when the BJP decided to name him as its V-P candidate.

Known for his oratory skills, Mr Naidu had vigorously backed Narendra Modi for the Prime Minister’s post before the 2014 elections, describing the latter as “God’s gift to India” and a “Messiah of the poor”.

Born in an agricultural family in Andhra Pradesh’s Nellore, Mr Naidu has served as BJP president, Central minister in-charge of various portfolios and he has been a long-time Rajya Sabha member. He was elected to the Upper House thrice from Karnataka, and the fourth time from Rajasthan.  Mr Naidu was also a two-term member of the Andhra Pradesh legislative Assembly.

Losing his mother at a very tender age, Mr Naidu was brought up by his grandparents. Mr Naidu, who has travelled the length and breadth of the country for party related activities, often says jokingly that his own grandchildren should call him “TV tata (grandfather)” as his work keeps him away from home for many days.  In political circles, Mr Naidu is known as a gracious host who mostly serves Andhra’s delicacies.

There is a story about how, during Shankarsinh Vaghela’s coup in the late 90s, when he quit the BJP along with 45 MPs and formed a government with Congress’ support, Mr Naidu would ask his family to send pickles as he had to camp in Gujarat for nearly three weeks.

In the Modi government, he held information and broadcasting and housing and urban affairs and the parliamentary affairs portfolio. In the previous NDA government led by party patriarch Atal Bihari Vajpayee, he served as rural development minister.

The veteran party leader also served as the BJP’s national president from July 2002 to October 2004 for two consecutive terms. He quit the post after the party’s defeat in the 2004 Lok Sabha elections.

Several major legislations were cleared by Parliament when he was parliamentary affairs minister, including the historic Real Estate Act. He also oversaw fast-forwarding of the GST Bill.