India   All India  06 Aug 2017  Gujarat Cong MLAs to fly back to state tomorrow from B'luru; no Delhi stopover
India, All India

Gujarat Cong MLAs to fly back to state tomorrow from B'luru; no Delhi stopover 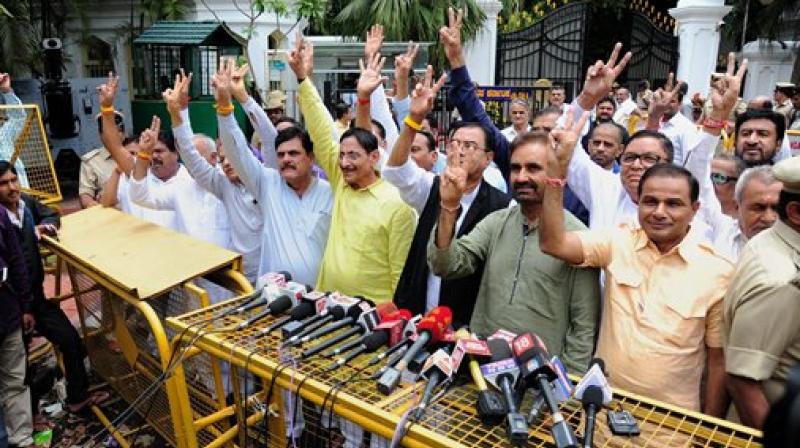 Gujarat Congress MLA's comes out of Rajbhavan after meeting with Governor in Bengaluru on Saturday. (Photo: AP)

Bengaluru: The Gujarat Congress legislators, camping at a private resort near Bengaluru, would be flown back to their home state directly and not to Delhi as has been reported in a section of the media, party sources said on Sunday.

The Gujarat Congress had sent 44 of its MLAs  on July 29 to fend off the "poaching" attempts by the BJP, ahead of the August 8 Rajya Sabha poll in that state, in which Ahmed Patel, the political secretary to Congress chief Sonia Gandhi, is contesting.

Denying the reports that the MLAs would first be flown to Delhi to meet Sonia, Congress spokesperson Shaktisinh Gohil said they would be returning to Gujarat "directly".

However, he declined to disclose when would the MLAs return to their home state.

"One thing that has been decided is that all of us (the 44 MLAs) will fly to Gujarat, not Delhi," he said.

Gohil alleged that it was the BJP, which was spreading "canards" that the Congress MLAs would first be flown to the national capital to meet Sonia.

He also charged that the saffron party was spreading "false reports" that the MLAs would use the 'NOTA' option in the upcoming Rajya Sabha poll to defeat Patel.

The Congress has objected to the 'NOTA' option in the Rajya Sabha poll, which is being seen as a prestige battle for the party in Gujarat.

Gohil asserted that all the Congress MLAs were "united" and that they would vote for Patel in the August 8 election.

Six of the 57 Congress MLAs in Gujarat have quit the party recently with three of them joining the BJP on July 28.