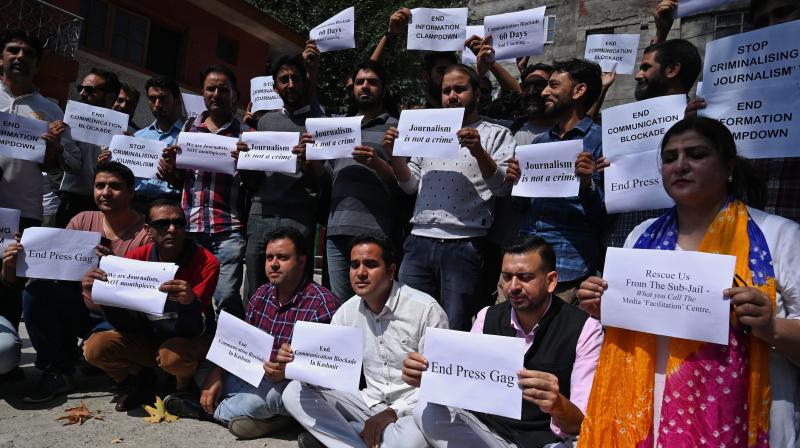 Journalists hold signs during a protest against restrictions of the Internet and mobile phone networks at the Kashmir Press Club during a lockdown in Srinagar. (File Photo- AFP )

SRINAGAR: Amnesty International (AI) on Wednesday urged the Indian government to immediately release all political leaders, journalists and activists from administrative detention, restore 4G mobile internet, decongest prisons and launch a prompt and independent investigation into the attacks on journalists in Jammu and Kashmir.

The human rights watchdog’s statement comes a day after New York-based Human Rights Watch (HRW) said that Indian government continues to impose “harsh and discriminatory restrictions” on Muslim-majority areas of J&K, one year after the revocation of the State’s special constitutional status.

“Over the last one year the Government of India has been systematically dismantling all avenues for justice for the people of J&K. With zero representation, protracted internet restrictions, arbitrary use of some of India’s most stringent laws, verbal orders of detention and crippling of the local media – most of this disproportionately higher in Kashmir - it’s been a complete year since we have heard the people of Jammu and Kashmir speak,” Avinash Kumar, Executive Director, AI said.

The AI has released a video report on the basis of interviews of several J&K journalists and corroborating “evidence” from news reports – both print and digital and Right to Information applications, to substantiate the heavy-handed tactics of the government  to curb the freedom of press and expression in the UT.

The human rights organization said that it acknowledges that the Government of India may have legitimate security concerns which may merit reasonable restrictions on the right to freedom of expression in certain circumstances. “But these restrictions must always be limited in duration and demonstrably proportionate as set out under Article 19 of the International Covenant on Civil and Political Rights (ICCPR), to which India is a state party”.

Meanwhile, the International Federation of Journalists (IFJ) and the  South Asia Media Solidarity Network (SAMSN) members have in  a joint statement urged the government to restore high speed internet in J&K.

“ The communications and internet shutdown has severely affected the work of journalists and media. The shutdown of media-houses, declining advertising revenues, job losses, pay cuts, lack of professional safety, self-censorship and the general curtailing of freedom of expression are some of the impacts of the communications shutdown,” the statement said.

It added, “Journalists who have managed to hold on to their job face difficulties when collecting information, sourcing and editing photos and videos online, and conducting online research and fact checks. On top of the restrictive internet shutdown, Kashmir journalists continue to be targeted by authorities”.

It further said, “Attacks, harassment, detentions and obstructions to reporting are commonplace in Kashmir following the revocation of Article 370. The introduction of the new 2020 ‘Media Policy’ by the J&K administration has further affected independent journalism in Kashmir”.