IMD Mumbai predicted heavy to very heavy rainfall in Mumbai, Palghar, Thane, Raigad, and Nasik for the next 24 hours 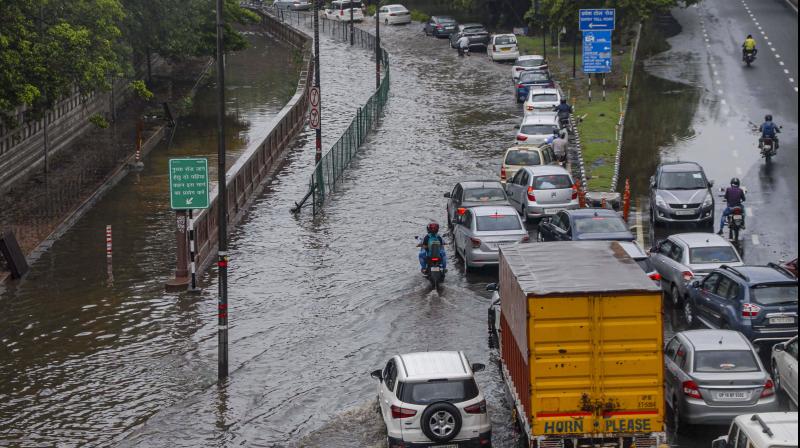 Though the Maharashtra government has increased relaxation in its Coronavirus-induced lockdown from Wednesday however, most people stayed indoors due to heavy rainfall.

Maharashtra chief minister Uddhav Thackeray also said that the IMD has issued warning for heavy to very heavy rainfall in Mumbai and at various places in district Thane, Palghar and on Thursday as well and requested citizens to step out of their houses only if there is any unavoidable reasons.

Thackeray has also directed all the municipal commissioners to handle the situation in coordination with other civic bodies, police,  railways, health care workers and NDRF. He has also asked them to take immediate action where citizens face any inconveniences, power distribution, falling of trees, water logging and any other problems arising due to incessant rains.

The CM has also cautioned the MMRDA workers to stay more alert while working at ongoing Metro construction sites and ensure no accident occur.

The India Meteorological Department (IMD) Mumbai has predicted heavy to very heavy rainfall in Mumbai, Palghar, Thane, Raigad, and Nasik with the possibility of extremely heavy rainfall at isolated places for the next 24 hours.

Rainfall in Mumbai on Wednesday resulted in water-logging not only in low lying areas but also casualty ward on the ground floor of state-run JJ Hospital in South Mumbai. Low lying areas of of Chembur, Parel, Hindmata, Mumbai Central, Byculla, Parel, Wadala even at Walkeshwar Road near Wilson College in Girgaon as well as other areas of the city were sub-merged. Rains lashed Mumbai and neighbouring Thane and Palghar districts of Maharashtra affecting local train and bus services due to water-logging on rail tracks and roads.

The BSE signage on the top of the building in Mumbai also come apart following extremely heavy rainfall.

According to Mumbai airport authority, seven go-arounds of flight due to rough weather, zero cancellations or diversions were observed.

Meanwhile, south Mumbai received its heaviest rainfall of the season, as Colaba weather observatory recorded 229.6 mm rain in nine hours between 8.30 am and 5.30 pm. Santacruz recorded 65.8 mm in the same time period.

A large number of trees were uprooted in Mumbai, Navi Mumbai due to strong winds and heavy rainfall.

Western Railway update stated that heavy rain and tree branches approaching near track at Churchgate, Mumbai Central and in between Marine Lines and Charni Road, the special suburban trains have been suspended temporarily between Mumbai Central, and Churchgate. Trains were being reversed from Mumbai Central Dadar, Bandra and Andheri.

Two  local trains were stuck between Masjid and Byculla station in Mumbai due to water on tracks. Railway staff rescued 150 passengers from the first local going from CST to Karjat. Meanwhile the NDRF was busy rescuing around 100-120 other passengers who were inside.

Another local which was coming from Karjat to CST got stuck at about 60 mtrs from Masjid station with around 50-60 passengers and the NDRF team was going to rescue them too.

According to reports the water level of Rajaram Dam is likely to cross the warning level of 39 feet by Wednesday night due to the rains. Kolhapur District Collector Daulat Desai has advised the people residing on the bank of Panchganga River to shift to safe places immediately in Kolhapur.

Sangli district administration said that the people residing on the bank of rivers in Sangli should stay on alert as the water level is increasing due to continuous rain in the area.