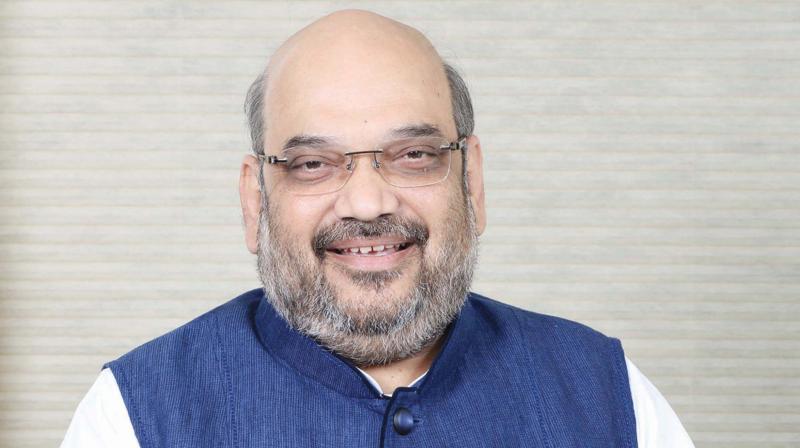 Narharpur: Bharatiya Janata Party (BJP) president Amit Shah on Friday accused the Congress of forging “ties with Naxals” to remain in power in Chhattisgarh before 2003.

The BJP government in the state had succeeded in containing the Maoist menace, Shah said, addressing a tribal convention at Narharpur in the insurgency-hit Kanker district.

Targeting the Congress ahead of the state Assembly polls over various issues, he challenged the opposition party to an open debate on its development track record.

The convention marked the conclusion of the Atal Vikas Yatra campaign launched by Chief Minister Raman Singh to highlight the achievements of his 15-year rule.

“Chhattisgarh once reverberated with the sound of bullets.... I have no hesitation in saying that the earlier Congress government (before the BJP came to power in the state in 2003) had forged ties with Naxals to stay in power. We broke that nexus and cracked down on Naxals.

“Entire Chhattisgarh is gradually getting rid of Naxalism and heading on the path of development,” Shah said.

When Chhattisgarh came into existence, it was dubbed as one of the “Bimaru” (backwa-rd/sick) states and despite being in power for the initial three years, the Congress did nothing to boost its economic growth, he alleged.

The Congress did nothing to maintain law and order, curb Naxalism, eradicate hunger and uplift the forest-dwellers, despite being in power for 55 years at the Centre, the BJP chief said.

Shah mentioned the 24-hour power supply, road connectivity in the interior villages, purchase of forest produce at a minimum support price and other development works as some of Singh's achievements in the last 15 years.

The BJP president slammed the Congress over a scandal triggered by the circulation of a “sex CD”, purportedly featuring state Public Works Department Minister Rajesh Munat. Munat has filed a case against state Congress chief Bhupesh Baghel for allegedly trying to malign his image by circulating the CD.

“The BJP will be contesting the polls under the leadership of Prime Minister Narendra Modi and Chief Minister Singh, but I want to ask Congress president Rahul Baba (Rahul Gandhi), who will lead the Congress? Will it be those who manufacture fake CDs for character assassination?” Shah asked.