The trio of Lals ruled for decades, however their families are now fighting to stay relevant. 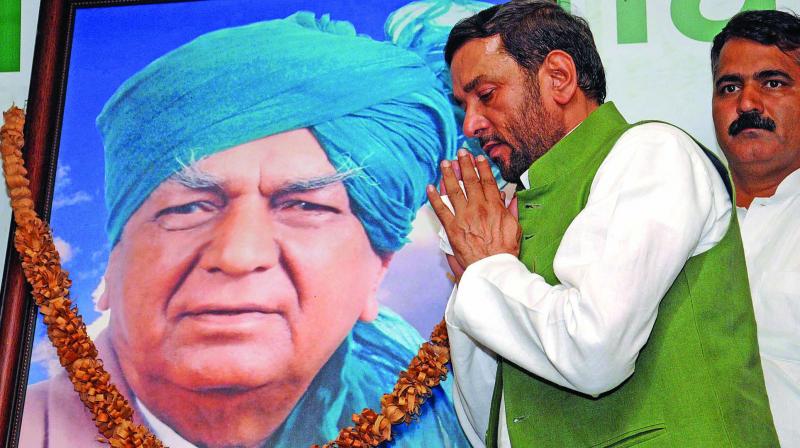 Chandigarh: Once synonymous with the state, the three Lals of Haryana and even their families ruled the state for decades. Now with the changed political reality, the families of the Lals of Haryana, namely Devi Lal, Bansi Lal and Bhajan Lal, are fighting a battle to stay relevant in the state politics.

Bansi Lal had been known to be a tough administrator from 1968-99. Subsequently, Chaudhary Devi Lal who formed the INLD emerged as a farmer leader of north India and later became the deputy prime minister. He was a rustic, awe-inspiring leader with a formidable presence. Bhajan Lal was a master strategist and was the biggest non-Jat leader of the state. The trio of Lals ruled for decades, however their families are now fighting to stay relevant.

Two-term CM Bhajan Lal made headlines in 1980 when he as CM of the Janata Party government walked over to the Congress along with his cabinet. He ruled the state for 11 years. The three clans of the once-powerful Lals are now a pale shadow of their past. Things have come to such a pass that the three families find it hard to save their bastions from the onslaught by the ruling BJP.

The family of Bansi Lal has been reduced to the margins of the state politics. Bansi Lal’s son, Surender Singh, died in a helicopter crash in 2005, weeks after becoming a minister in the Bhupinder Singh Hooda government. His wife and Tosham MLA Kiran Choudhry is the flag-bearer of the family legacy. She has been struggling for recognition as inheritor of Bansi Lal’s legacy. Her daughter, Shruti Choudhry, suffered the second consecutive defeat in the Lok Sabha elections by more than 4 lakh votes.

The Bhajan Lal’s family is also finding it difficult to remain relevant in the state politics. The younger son Kuldeep Bishnoi has tried hard to stay relevant in the state politics. He had formed Haryana Janhit Congress, had an alliance with the BJP and then joined back the Congress. His son Bhavya Bisnoi made his electoral debut from Hisar parliamentary seat (which was once considered their family bastion), but forfeited his security deposit as a Congress candidate. Kuldeep Bihsnoi has faced IT raids recently. The enforcement directorate is investigating suspected foreign exchange management Act (FEMA) violations. Kuldeep Bisnoi has called these raids politically motivated in an election year.

The family of Devi Lal was most influential in Haryana politics for the longest period amongst the three Lals. However, after a split in the Chautala family, the INLD got a fatal blow.

Om Parkash Chautala’s ambitious grandson, Dushyant, a former MP and son of Ajay Chautala, floated the Jannayak Janata Party (JJP), the INLD imploded. Both parties are fighting to claim who will be the rightful inheritor of Devi Lal’s legacy. However, during the parliamentary elections, the INLD and JJP both got a drubbing. The INLD is finding it hard to stay relevant in the state politics as it was till last elections by remaining as the main Opposition party.