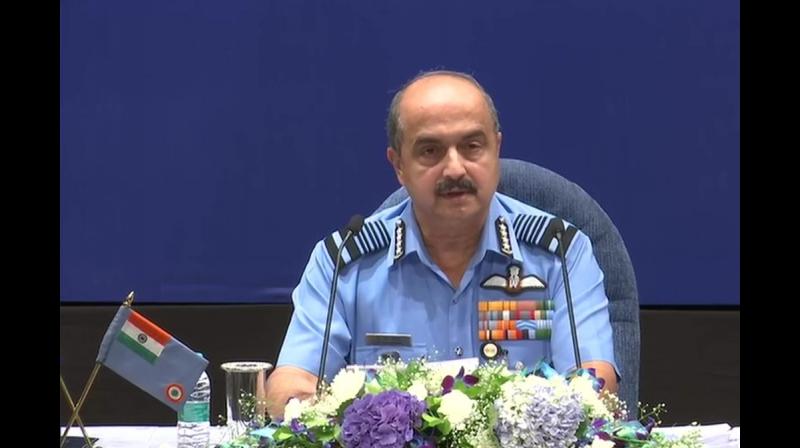 Air Chief Marshal Chaudhari said while the Air Force will get 83 Light Combat aircraft MK1A, 114 MRFA and Advanced Medium Combat Aircraft, it would also have to retire the Jaguar and MiG-21, which will bring down the IAF’s squadron strength. (Twitter)

New Delhi: At a time when there’s a joint threat from China and Pakistan, the Chief of Air Staff, Air Chief Marshal V.R. Chaudhari, said Tuesday that India will not have its full 42 fighter squadrons even in the next 10-15 years.

He said the Indian Air Force can only get a maximum of 35 squadrons in the next 10 years, up from the current 31-32. Each squadron has around 16-18 aircraft. Earlier, the IAF had assessed it will need 42 squadrons to protect the western and northern borders with Pakistan and China.

Air Chief Marshal Chaudhari said while the Air Force will get 83 Light Combat aircraft MK1A, 114 MRFA and Advanced Medium Combat Aircraft, it would also have to retire the Jaguar and MiG-21, which will bring down the IAF’s squadron strength.

The Air Chief said the Chinese PLA Air Force was developing its airbases along the Line of Actual Control and its aircraft were still present at three bases across eastern Ladakh even as disengagement talks were going on between the two countries.

However, he said that while China was developing its infrastructure, it would not impact air operations. He said that the Chinese Air Force’s capability to launch multi-mission operations from such high-altitude airfields would remain a weak area. “We are fully prepared,” the Air Chief said at the customary annual press conference before Air Force Day on October 8.

On collusion between China and Pakistan against India, the IAF Chief said this would always remain a threat, and Indian Air Force capability building was dependent on what the threat is. “Be rest assured we are capable... we are prepared in terms of training and equipment to handle a two-front scenario,” said Air Chief Marshal Chaudhari. He said there was nothing to fear from this partnership. “But the only worry is Western technology passing from Pakistan to China.”

“With regard to the airfields in Pakistan and PoK, we don’t need to be very alarmed as they are small strips capable of taking on a few helicopters. The ones towards the Afghan border is probably for rescuing their own people from Afghanistan,” he said.

The IAF Chief said India will start getting its first Russian-made advance air defence system S-400 within this year.

On theaterisation, Air Chief Marshal Chaudhari said that the concerns expressed by the Air Force have been taken into account and discussion on it was still going on. He said the theaterisation structure will have to cater to future warfare and the strengths and doctrine of each service has to be kept in mind while designing the structure. However, he said the IAF was fully committed towards integration and theaterisation.

“We are hopeful that the ultimate structure that will emerge will cater for joint planning and joint operations in future,” he said.

On the recent controversy where CDS Gen. Bipin Rawat had called the Air Force a “support arm” of the Army, he pointed out no one service can go alone in a war and each service needs the others’ support. “The Army also at times has to support the IAF in its air operations,” he said.

“We have four squadrons of MiG-21s, and the drawdown will happen in the next three to four years,” Air Chief Marshal Chaudhari added.