Earlier, Rahul Gandhi said while campaigning in Gujarat - where elections will be held in December - that GST stood for 'Gabbar Singh Tax'. 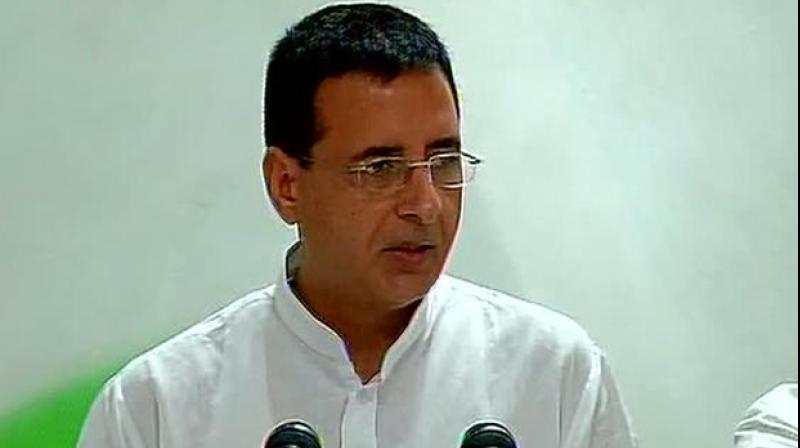 Congress spokesperson said, 'People feared Gabbar when he used to say kitne aadmi the and now they fear Modi when he says mitron because they do not know what is coming next.' (Photo: File | PTI)

Dharamsala: The Congress on Sunday upped the ante on the issue of Goods and Services Tax (GST), drawing a parallel between lines made famous by Bollywood villain Gabbar Singh and Prime Minister Narendra Modi's characteristic way of addressing the people.

"People feared Gabbar (Singh) when he used to say 'kitne aadmi the (how many people were there)' and now they fear Modi when he says 'mitron (friends)' because they do not know what is coming next," Congress spokesperson Randeep Surjewala said at a rally Dharamsala.

The Congress leader claimed the Modi government was the first central government to levy a tax on farmers in the form of the GST.

"Eighteen per cent tax is levied on agriculture and 12 per cent on agriculture equipment... the first time in India. Farmers are working hard to fill our stomachs, and they must be exempt from tax... That is why Rahul Gandhi has termed GST Gabbar Singh Tax," he said.

Surjewala accused the Modi government of being "anti" Himachal Pradesh, which goes to polls on November 9, and reneging on the promises the BJP made to the people of the state before the 2014 Lok Sabha polls.

He said various sections of society were affected by the "lopsided" policies of the NDA government.

Interacting with news persons, he said Modi had in Solan in 2014 promised to raise the import duty on apples to protect local growers, but nothing was done.

Over three lakh tonnes of apples are imported from the US, China and New Zealand, he claimed.

"The promise of building a railway line from Mandi to Leh and making HP a tourism paradise has not been kept. No tourism project was sanctioned in the last 41 months," the Congress leader claimed.

"The people of Himachal feel cheated... the BJP makes big promises, but fails to keep them after coming to power," he said.

"Our chief minister is so strong that he has scared the daylights out of them. The BJP has failed to counter the Congress on the developmental works it has undertaken in HP," he said.

"All our senior leaders are campaigning... Rahul ji will be campaigning tomorrow, Anand Sharma is here... so are Manpreet Badal, Raj Babbar, Sushil Kumar Shinde, Jitendra Singh, we are all here," he said.

He alleged that demonetisation had led to no real gains.

"There is unemployment and runaway inflation. The double whammy of demonetisation and GST has hurt the common man and small businesses irreparably," he said.