Peace is our strength, not our weakness. 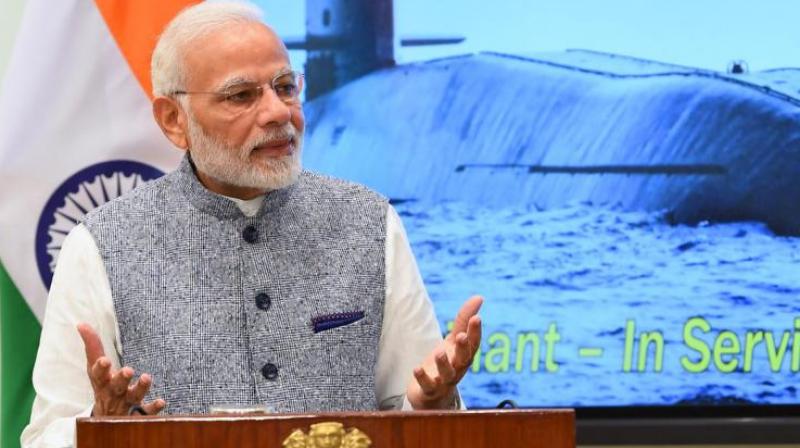 PM Modi while addressing the crew of INS Arihant said, 'The success of INS Arihant enhances India’s security needs. It is a major achievement for our entire nation.' (Photo: Twitter | @narendramodi)

New Delhi: As the Indian Navy’s nuclear submarine INS Arihant has successfully completed its first deterrence patrol, Prime Minister Narendra Modi said on Monday it was a “fitting response” to those who indulge in “nuclear blackmail”, in a clear but veiled reference to Pakistan’s oft-repeated nuclear threats. Dhanteras, he said, had become even more special.

“India’s pride, nuclear submarine INS Arihant successfully completed its first deterrence patrol! I congratulate all those involved, especially the crew of INS Arihant, for this accomplishment, which will always be remembered in our history,” he said in a series of tweets.

This is a major achievement for the country, the PM said, adding INS Arihant would help protect the country from external threats and contribute to the atmosphere of peace in the region. “In an era such as this, a credible nuclear deterrence is the need of the hour. The success of INS Arihant gives a fitting response to those who indulge in nuclear blackmail,” he tweeted. The Prime Minister, addressing the Arihant crew, warned the enemies of India not to “resort to any audacity”, asserting that India was a peace-loving country and does not instigate anyone but does not spare those who needle it. “Our nuclear arsenal are not a part of an aggressive policy, but it is an important means for peace and stability. Peace is our strength, not our weakness. Our nuclear programme must be seen with regard to India’s efforts to further world peace and stability,” he said. Dubbing INS Arihant as the “harbinger of fearlessness” for the country, Mr Modi said: “Today is historic because it marks the completing of the successful establishment of the nuclear triad. India’s nuclear triad will be an important pillar of global peace and stability.” The PM noted that this achievement has put India among a handful of countries having the capability to design, construct and operate a Strategic Strike Nuclear Submarine. BJP president Amit Shah described the achievement as a “historic feat”, as he hailed Mr Modi’s strong leadership, which, he said, had enhanced the country’s strategic and economic position globally.