S Korean first lady meets PM before leaving for UP

The South Korean first lady will travel to Lucknow on Monday evening where she will meet UP Chief Minister Yogi Adityanath. 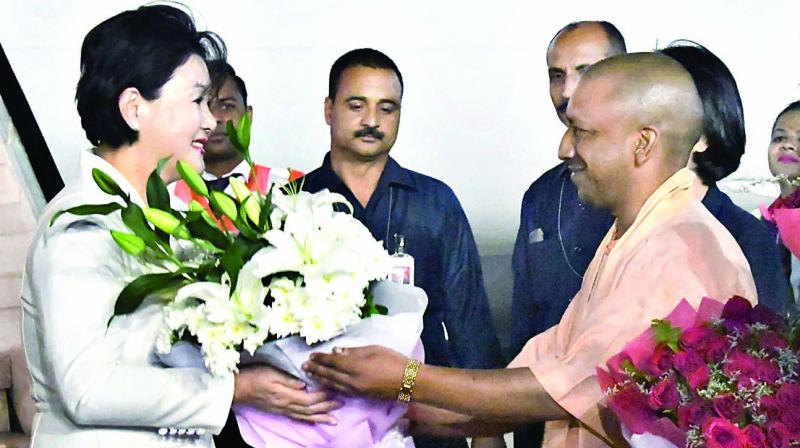 New Delhi: Ahead of her visit to Ayodhya on Tuesday to reinforce the historical linkages between her country and the ancient Indian Temple town, South Korean first lady Kim Jung-sook met Prime Minister Narendra Modi on Monday evening. She also met external affairs minister Sushma Swaraj earlier in the day. The South Korean first lady will travel to Lucknow on Monday evening where she will meet UP Chief Minister Yogi Adityanath.

On Tuesday, the South Korean First Lady will travel to Ayodhya where she will be the chief guest at the “ground-breaking ceremony of the Queen Suriratna (Heo Hwang-ok) Memorial in Ayodhya”.

The Indian Government had earlier this week said “Ayodhya and Korea have a deep historical connection through the legendary Princess Surira-tna of Ayodhya, who travelled to Korea in 48 CE (AD) and married Korean King Suro”. She will also be the chief guest at the Deepotsav event there organised by the UP Government on Tuesday which is Diwali-eve.

As the entire Sangh parivar along with the BJP continues to raise the pitch on construction of the Ram temple at the disputed site, UP Chief Minister Yogi Adityanath will also be present at Ayodhya on Tuesday which is Diwali-eve. The invitation to visit India was extended to Ms Kim Jung-sook—wife of South Korean President Moon Jae-in—by PM Modi. The South Korean First Lady also interacted with school students in New Delhi on Monday. She will interaction with craftsmen of the traditional embroidery called “Chikankari” in Lucknow.