Chinmayanad chargesheeted for rape, his 'victim' law student for extortion

The law student has also been jailed after police charged her with extortion, criminal intimidation and 'disappearance of evidence'. 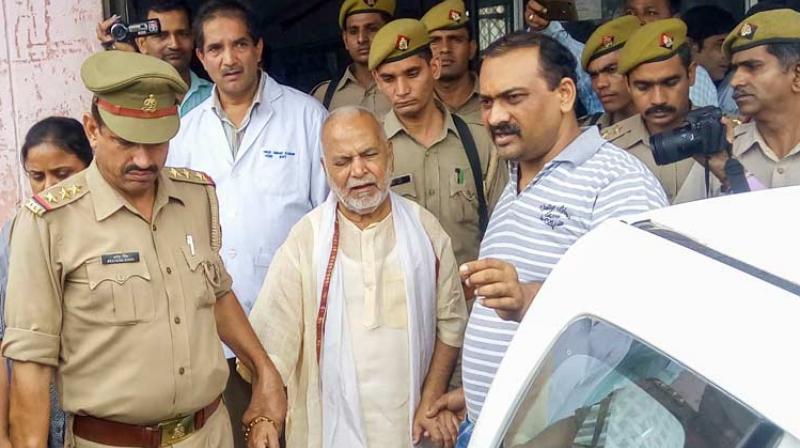 Chinmayanand has been charged under a law that deals with rape but a sub-section has been applied in his case, which deals with "misusing authority for sexual intercourse". (Photo: File)

Lucknow: A Special Investigation Team (SIT) of Uttar Pradesh Police has filed a chargesheet against former Union minister Chinmayanand who has been accused of rape by a 23-year-old law student. Another chargesheet has been filed against the student and her associates, who are under arrest, for allegedly blackmailing the BJP leader.

According to an NDTV report, the police said all the analysed evidence against the leader and the student proved the charges against them.

Naveen Arora, the head of SIT, said: "We managed to file chargesheets in less than two months. In both investigations, we questioned 105 people, recovered 20 pieces of evidence and also a lot of digital evidence and call data records. We recovered 55 paper trails and are submitting case diaries and chargesheets running into 4,700 pages."

Chinmayanand has been charged under a law that deals with rape but a sub-section has been applied in his case, which deals with "misusing authority for sexual intercourse". Under the sub-section, it carries a punishment of 5 to 10 years in jail and a fine. A rape charge, however, would have meant a seven-year jail to a life term. He has also been charged with stalking, criminal intimidation and wrongful confinement.

The law student has also been jailed after police charged her with extortion, criminal intimidation and "disappearance of evidence".

In a recent development on Tuesday, a BJP leader and his associate were booked in connection with the extortion case against Chinmayanand. The police identified the BJP leader as DPS Rathore, the younger brother of JPS Rathore, the vice president of the party's Uttar Pradesh unit. According to police, DPS Rathore was helping the law student extort money.

DPS Rathore has not yet been arrested but his name has been included in the chargesheet in the extortion case.

The chargesheets were filed on Wednesday afternoon and presented in UP’s Shajahapur court, 45 days after Chinamayanand and the student were both arrested.