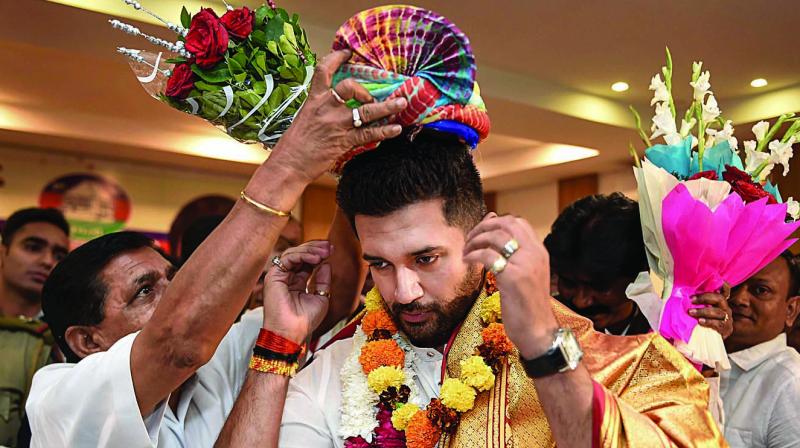 New Delhi: Marking yet another generational shift and dynastic succession in a regional party, Chirag Paswan on Tuesday took over the reins of the Lok Janashakti Party (LJP) from his father and Union minister Ram Vilas Paswan. The senior Paswan said the decision was taken in the meeting of the national executive in Delhi held on Tuesday.

The LJP, one of the offshoots of the erstwhile socialist Janata Dal, primarily draws its support from a section of Dalits in Bihar. It was founded by Ram Vilas in 2000.

The first polls contested by the LJP was in alliance with the Indian National Congress and the Rashtriya Janata Dal and it won four Lok Sabha seats from Bihar. Ram Vilas remained a Union minister in the ministry of chemicals and fertilizers and ministry of steel. Through the later years till now, Ram Vilas has steered it through changing political scenarios by joining hands with parties with contrasting ideologies and support groups. He is currently with the NDA and remains a Union Minister.

The first task for Chirag Paswan, who is a second-term Lok Sabha member from Jamui, would be to secure a respectable tally of at least six seats to fight in the coming Assembly polls in Jharkhand.

Taking charge of the party, he said that his father would continue to guide him.