In unprecedented protest, cops lay siege to police HQ against attacks by lawyers. 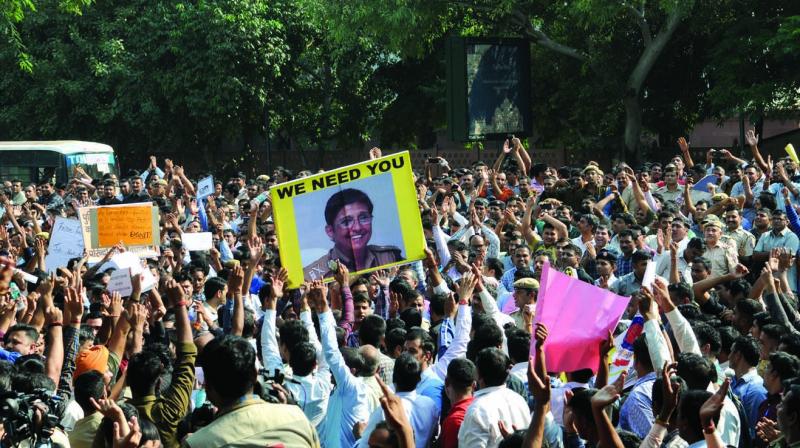 New Delhi: For the first time ever, the national capital witnessed the wrath of police personnel on Tuesday who took to the streets to protest against two attacks on their colleagues by lawyers, throwing the city’s traffic out of gear. Their rage was not merely confined to lawyers but was also directed at the apathy of the government and the top echelons of the force, including police commissioner Amulya Patnaik who had taken action against some police personnel on the directions of a court.

The surging crowd of protesting cops, some in uniform and others in civvies, had gathered outside Police Headquarters in the morning and were unrelenting in their demand that the licences of lawyers who assaulted their colleagues be revoked and the transfer of police officers involved in the Tis Hazari clash last week be rescinded. Picking the BJP government’s cheery rhetorical question, “How’s the Josh?” they held up placards that read: “How’s the Josh?… It’s low, Sir.”

The 11-hour long agitation, mostly by constables, assistant sub-inspectors and inspectors, was called off late evening after some of their demands were met. While Lieutenant Governor Anil Baijal assured action, special commissioner of police (crime) assured them that a review petition will be filed against the Delhi high court order in connection with the clash between cops and lawyers at the Tis Hazari Courts Complex. Mr Golcha also said that the injured policemen will get an ex-gratia of at least `25,000.

The unprecedented protest also had the Centre on its toes, especially after police from Haryana and Bihar extended support to their colleagues in Delhi. A review petion was filed and the Delhi high court issued a notice to the top lawyers’ body — the Bar Councils of India. The home ministry also called for a report on the Tis hazari incident.

The virtual revolt by Delhi Police’s foot soldiers was triggered by two sucessive attacks on cops.

On Saturday, a parking dispute between an on-duty policeman and a lawyer at the Tis Hazari Court complex flared up into a clash in which police opened fire and ordered lathi-charge on lawyers. Two lawyers received bullet injuries, while several others were injured. At least 20 police personnel also received injuries.

The heightened tension between Delhi cops and lawyers led to another shocking incident two days later. On Monday, at the Saket district court, some lawyers beat up a police officer.

The incident, caught on video, showed one lawyer elbowing a policeman on a bike as he was trying to leave the spot. The lawyer then slapped the policeman a few times and threw a helmet at the bike before the officer disappeared.

Taking suo motu cognisance of media reports on the Tis Hazari incident, the high court at a special sitting on Sunday ordered a judicial inquiry by one of its retired judges into the November 3 clash, and asked the police commissioner to suspend a police official and transfer two other senior police officials pending inquiry.

Acting on the court’s directions, the police chief on Sunday transferred special commissioner Sanjay Singh for ordering lathi-charge and additional deputy commissioner Harinder Kumar for giving permission to open fire at lawyers. One assistant sub-inspector Kanta Prasad was also suspended for allegedly dragging and beating up an advocate and another, Pawan, for firing at the lawyers.

Despite this, lawyers in Delhi’s six district courts — Tis Hazari, Karkardooma, Saket, Dwarka, Rohini and Patiala House — have been protesting against police brutality and not attending court since Monday.

Police’s prompt action against its own personnel, and the viral video of Monday’s seemingly unprovoked attack on a cop at Saket district court, led to the outrage and protests by cops on Tuesday.

Though service rules bar police personnel from holding protests, on Tuesday, 2,000-odd personnel laid siege outside the Police Headquarters, rejecting their chief’s pleas. The protestors blocked traffic at ITO, one of Delhi’s major traffic intersections, while their families, including women and children, held a candle light march at India Gate.

The policemen said they were upset over what they perceived as lack of concern about their well-being, and they feared being targeted when in uniform. Yet, taking care not to disrupt the functioning of police stations in the city, the cops were protesting in shifts. Police personnel joined the protest after finishing their respective duties.

Faced with angry cops wearing black bands, the police commissioner came out of his office to assure the agitators that their concerns will be addressed. “We have to behave like a disciplined force. The government and the people expect us to uphold the law, it is our big responsibility. I urge you to resume duty,” Mr Patnaik told the police personnel.  “The last few days have been testing for us. A judicial inquiry is underway and I request you to have faith in the process.”

Mr Patnaik’s appeals to pacify the cops, however, were drowned by jeers of “Go back, Go back”. In a show of lack of faith in their leadership, the agitating police personnel also held up the poster of one of India’s super cops, Kiran Bedi, with the slogan, “We Need You”. They also shouted, “Humara Commissioner kaisa ho, Kiran Bedi jaisa ho”.

In 1988, Ms Bedi had famously clashed with lawyers and had stood her ground.

Holding up placards with slogans such as “We are human in police uniforms”, “We are not punching bags” and “Protectors Need Protection”, some policewomen urged their seniors to stand with them to save the honour of the uniform.

The wife of a constable, protesting at India Gate, said, “Our men are on duty around the clock so that the people can celebrate every festival without fear. But while making those sacrifices, they get thrashed on the roads. Don’t we have feelings or any rights?”

As the agitation gained momentum with police associations from several states extending support and threatening to march to Delhi, home ministry stepped in to take stock of the situation.

The Centre rushed to the Delhi high court on Tuesday, urging that its order for “no coercive action against advocates”, passed on Sunday following the lawyers-police clash at Tis Hazari complex, should not be applicable on the subsequent incident, specifically the Saket incident.

A bench of Chief Justice D.N. Patel and Justice C. Hari Shankar issued a notice to the Bar Councils to get their members to exercise restraint and sought the response of the Bar Council of India and several other bar associations of national capital on the Centre’s plea.

The Bar Council of India on Tuesday wrote to bar bodies asking them to identify lawyers “indulging in hooliganism” and requested advocates to end their protest, which is “bringing bad name to the institution”.

BCI chairman Manan Kumar Mishra in his letter said sparing such “rowdy elements” is tarnishing the image of the institution and it is the inaction and tolerance of bar bodies that encourages these advocates, which would ultimately result in “contempt proceedings by the high courts or Supreme Court”.

“The incidents of beating policemen on bike by some of Saket lawyers, assault of an auto driver, manhandling general public are most unfortunate and Bar Council of India is not going to tolerate it. These are acts of grave misconduct,” the letter said.

Mr Mishra further said, “The way some lawyers are acting even after such a nice step of Delhi high court, yesterday’s (November 4) behaviour of few lawyers has disturbed us... Abstaining from Court or resort to violence will not help us, rather by doing this we are losing the sympathy of courts, Inquiring judge, CBI, IB and Vigilance. Even general public’s opinion is going adverse to us. Result may be dangerous.”

Lawyers, however, said they would continue to boycott work on Wednesday, notwithstanding the Bar Council of India’s appeal to end their strike.

Outside the Police Headquarters, protestors demanded that the licences of lawyers who assaulted their colleagues be revoked and the transfer of the officers involved in the Tis Hazari clash last week be rescinded. “We also want a Police Association, better treatment to injured policemen, the reinstatement of suspended police personnel. Strict action should be taken against advocates,” said one of the protesters, reading out the list of demands.

The cops also want that the FIRs filed against policemen by lawyers in connection with the Tis Hazari incident be quashed.

Condemning the police protest, Mahavir Sharma, chairman of coordination committee of All Bar Associations in Delhi, said that the lawyers strike will continue till the “guilty officers” are arrested.

“Abstinence from work in all Delhi district courts will continue tomorrow. In order to ensure success of the movement, all are requested to maintain the movement peacefully. Litigants be permitted to have access to the court rooms,” said Dhir Singh Kasana, secretary of general coordination committee, All District Courts Bar Association.