Rainfall at most places with isolated heavy rainfall very likely over Andaman and Nicobar Islands during next three days. 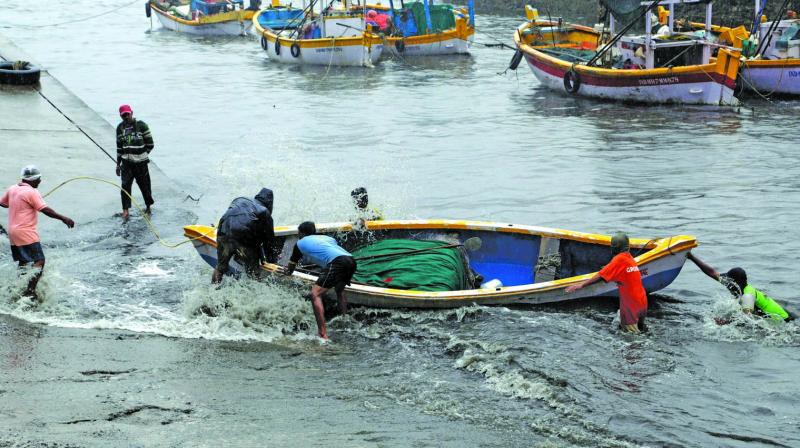 Fishermen pull their boat during high tide in the Arabian Sea in Mumbai on Tuesday. The weather office has issued a rain and thundershower warning for Mumbai and suburbs beginning on Monday night in view of Cyclone Ockhi. (Photo: AP)

New Delhi: With cyclone Ockhi inching towards Gujarat after creating havoc in parts of Tamil Nadu, Kerala and Lakshadweep, Prime Minister Narendra Modi on Tuesday said he is constantly monitoring the situation in various states.

“Spoke to all relevant authorities and officials. All possible assistance is being provided to those affected,” he tweeted.

He also appealed to BJP workers in Gujarat to focus on helping people across the state where the cyclone is likely to make a landfall.

"Our karyakartas (workers) should devote themselves to providing all possible assistance and stand shoulder to shoulder with fellow citizens," he added further.

Meanwhile Uttar Pradesh chief minister Yogi Adityanath called on Mr Modi and handed over a cheque of Rs 5 crore for the cyclone-affected people in Lakshadweep and other states, an official statement said.

In an advisory, the National Disaster Management Authority (NDMA) asked fishermen in both eastern and western coasts not to venture out in the sea for the next three days as heavy rainfall is expected in many areas due to Cyclone Ockhi.

Fishermen living along and off South Gujarat and North Maharashtra coasts are advised not to venture into the sea till Wednesday morning.

Rainfall at most places with isolated heavy rainfall very likely over Andaman and Nicobar Islands during next three days.