Bajrang Dal’s region co-convenor Praveen Bhati claimed Yogesh Raj had nothing to do with the violence. 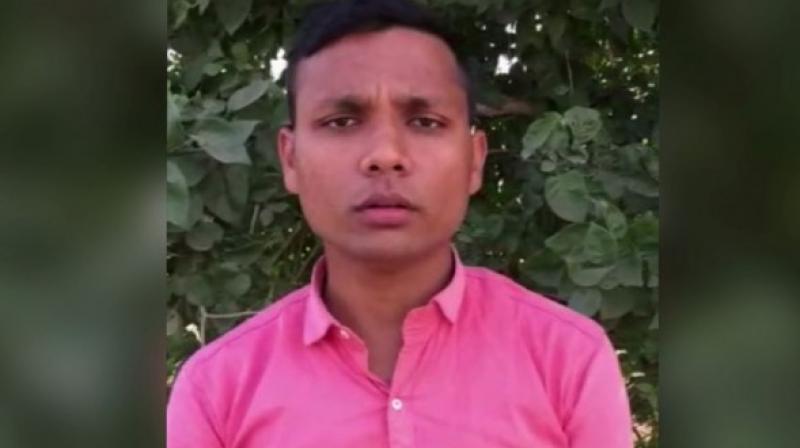 Yogesh says in the video that in the alleged cow slaughter in Bulandshahr, which led to the violence, the police are "portraying me as if I am a history-sheeter." (Photo: Youtube screengrab)

Bulandshahr/Lucknow: A Bajrang Dal leader absconding after Monday’s mob violence over alleged cow slaughter that killed a police inspector and a youth in Bulandshahr surfaced in a video clip Wednesday, claiming innocence.

The western Uttar Pradesh unit of the right-wing organisation has also claimed that its Bulandshahr convenor Yogesh Raj was not involved in the violence, but said he should surrender.

In the video, Yogesh Raj said that when he heard about a “cow slaughter” at Mahaw village, he went there with his supporters.“The police also reached there and we went to the Siyana police station for filing our complaint (about the carcasses),” he said.

Mr Raj said that while he and his supporters were still at the police station they got to know that villagers were pelting stones.

“I have nothing to do with it. I have full faith in God. I will be cleared of all accusations,” he said.

Bajrang Dal’s region co-convenor Praveen Bhati claimed Yogesh Raj had nothing to do with the violence. “He will cooperate with the police and come out at the right time,” Mr Bhati said.

The Bajrang Dal suggested that the probe into the violence should be conducted by the CBI, and not Uttar Pradesh police. Inspector Subodh Kumar Singh, who had initially probed the 2015 lynching of Mohammed Akhlaq in Dadri, and 20-year-old villager Sumit Kumar died of gunshot injuries in the attack by villagers protesting against alleged cow slaughter.

Meanwhile, state police chief O.P. Singh suggested there was “conspiracy” behind the violence.

Mr Singh said that with lakhs of people collected for a “Tabligi Ijtema”, a congregation of Muslims, 40 km from Mahaw village where the cattle carcasses were found before the violence on Monday, police also succeeded in containing what could have been a communal riot.

“We have started a reverse investigation to get to the bottom of this conspiracy. This is not a mere law and order issue. How did the cow carcass reach the field?  Who brought it here, why and under what circumstances? These are major questions that need an answer,” he said.

The police, who arrested four people after Monday’s violence, reported no further arrests till the evening. Chief Minister Yogi Adityanath will meet the slain inspector’s family on Thursday, officials said in Lucknow.

Security was visibly reduced but tension persisted in Chingrawathi, Mahaw and Naya Bans villages of Bulandshahr’s Siyana tehsil on Wednesday.

Many people kept away from their homes, fearing arrest in connection with the two FIRs registered by police — one over the alleged cow slaughter and the other for the violence that followed.

No classes were held in schools in the area where a mob torched a police post and attacked policemen on Monday after some carcasses were found in a field.