Bihar politicos come out with varied responses in Hyderabad encounter 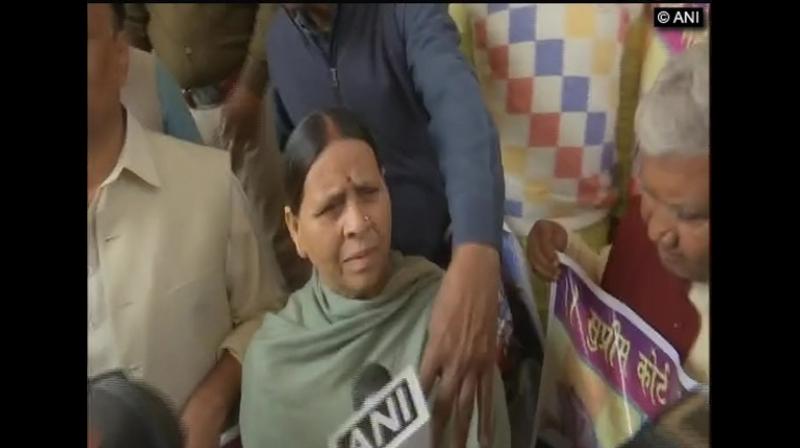 'What happened in Hyderabad will act as a deterrent against criminals ... we welcome this. In Bihar too, incidents of crimes against women is rising. The state government here is lax and doing nothing,' former Chief Minister Rabri Devi wrote on Twitter. (Photo: File | ANI)

Patna: The killing of four suspects in the Hyderabad rape and murder case in a police encounter on Friday evoked varied responses from the political class in Bihar where two similar cases were reported in different parts of the state this week, evoking public outrage.

Discordant voices emerged from the main opposition RJD wherein one of the national vice-presidents sought an inquiry into the killings and asserted that there must be rule of law while another felt that the deaths of the alleged accused in a police encounter would act as a 'deterrent'.

"What happened in Hyderabad will act as a deterrent against criminals ... we welcome this. In Bihar too, incidents of crimes against women is rising. The state government here is lax and doing nothing", former Chief Minister Rabri Devi wrote on Twitter.

Her comment had an apparent reference to the recent incidents at Buxar and Samastipur districts, where charred bodies of women were found dumped in secluded spots after suspected rape and murder and the police have been struggling to identify the deceased because of the severe burns on the corpses.

However, former Union minister Raghuvansh Prasad Singh, a national vice president of the RJD said in Muzaffarpur ''this is not right. The country has to be governed by law and not by sentiments''.

"It is true, there has been a rise in crimes against women everywhere and that has caused a lot of public anger. That, however, cannot justify the police action in the Hyderabad incident which gives rise to many suspicions", said Singh.

The encounter that took place in the Hyderabad when the suspects had allegedly tried to flee from custody after being taken to the spot, for investigation, where the body of a young veterinary doctor, raped and murdered before being set afire, was found last week.

Rajesh Ranjan alias Pappu Yadav, a mafia don-turned-politician who has floated his own Jan Adhikar Party and fashioned his image after Robin Hood, rejoiced at the Hyderabad encounter, writing on Twitter "better late than never. Justice should be done on the spot and an example should be set".

"But many girls are sexually exploited inside their homes. How will the culprits in these cases be encountered", Yadav remarked cryptically.

Meanwhile, BJP spokesman Nikhil Anand tweeted, using the hashtag #Tit4Tat, "it gives great sense of satisfaction that the brutal rape-murder accused of our sister are killed. We need to make India a rape free country and anyone who dares (to transgress) must cease to live on this earth".