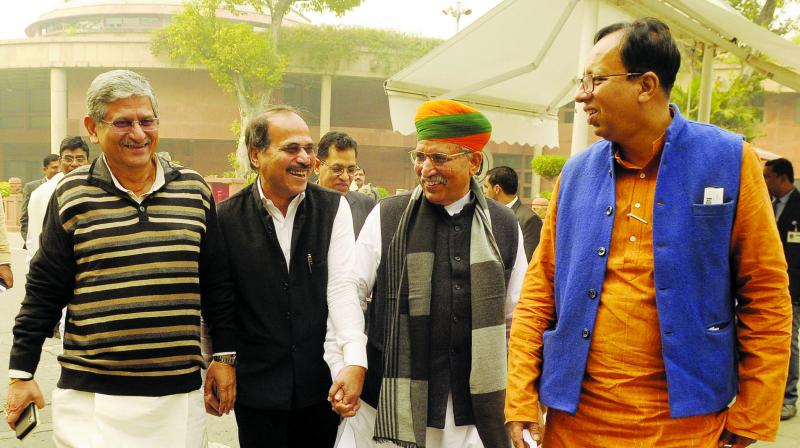 Minister of State for Parliamentary affairs Arjun Singh Meghwal along with Congress leader Adhir Choudhary and others arrives at the Parliament House during the winter session in New Delhi on Thrusday,December 05,2019. (Photo: Pritam Bandyopadhyay)

New Delhi: Every political party tends to invoke farmers and agricultural issues, but when a discussion on the farming crisis and crop loss was held in Lok Sabha on Thursday, the House wore an empty look. Fittingly, one member pointed out during the debate that 95 per cent of the members of Lok Sabha were connected with farming in one way or the other, but this did not reflect in their attendance.

At one point of time, only 21 members of  Parliament belonging to the Bharatiya Janata Party (BJP) and its allies and 31 from Opposition were present in the House during the debate. And this ratio remained more or less the same as the House discussed crop loss and its impact on farmers under Rule 193.

While the members from Opposition parties raised several issues concerning farmers including the onion crisis, the treasury benches were seen defending the government and lauding the work done by the Modi government for farmers’ welfare. A few MPs from states are not governed by the BJP did not lag behind in mentioning the good work by their party’s chief ministers. For instance, YSR Congress Party’s K. Raghu Ram Krishna Raju detailed Andhra Pradesh chief minister Jagan Mohan Reddy’s farmer welfare schemes.

While the Opposition accused the government of not taking enough measures for farmers’ welfare and to keep food prices in check, the treasury benches listed the welfare schemes that have been launched by the Modi government in the last six years. Some BJP members also criticised the Congress and its allies for not doing enough for farmers in the states where they are in power. “The Opposition is so aggressive, it’s as if this government has not done anything even though they too have governments in several states,” said Dharambir Singh, the BJP MP from Bhiwani-Mahendragarh constituency  in Haryana.

Some MPs also suggested providing a minimum support price (MSP) to farmers for onions, as is the case with other crops, while others argued that there was no crisis in the first place. The BJP MP from Uttar Pradesh’s Ballia constituency, Viren-dra Singh Mast, stated that the onion prices issue was being overblown. “Onion is not an issue. In my constituency, each farmer has loads of onions stocked up and they are being sold at `20-25 in my area. How long will you (the Opposition) do politics over onions,” he said.

Suggestions were also made for reducing the goods and services tax (GST) rate on agricultural equipment and bringing diesel and petrol under its ambit, providing subsidies on agriculture machines, greater integration of National Rural Employment Guarantee Act (MGNREGA)  with farming through improved water bodies and that farmers be allowed to decided the MSP for their crops.