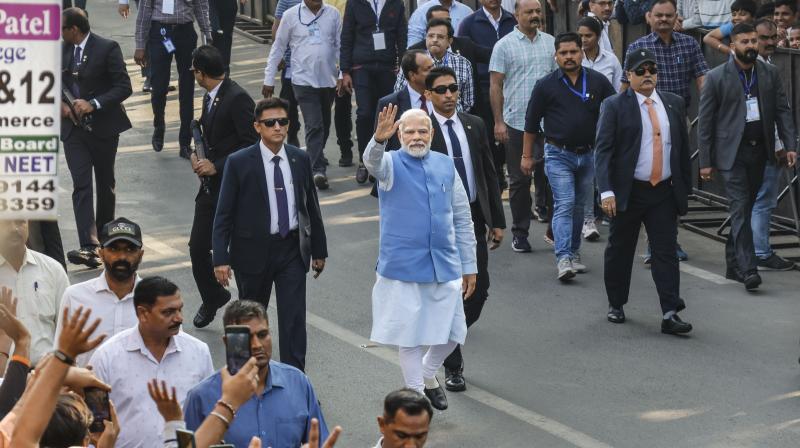 Prime Minister Narendra Modi arrives to cast his vote at a polling booth during the second and final phase of Gujarat Assembly elections, at Ranip area in Ahmedabad, Monday, Dec. 5, 2022. (PTI Photo)

NEW DELHI: If the exit poll predictions are anything to go by, saffron rule is set to continue undisturbed in Prime Minister Narendra Modi’s home turf Gujarat for the seventh consecutive time. As for Himachal Pradesh, while one exit poll predicted a Congress victory, others tilted towards a close contest between the traditional rivals, with an edge to the BJP. The counting of votes in both states will take place on Thursday, December 8. Elections to the Himachal Pradesh Assembly took place on November 12, while polling in Gujarat was in two phases on December 1 and 5.

In Gujarat, according to the exit poll predictions, the much-hyped entry of the Aam Aadmi Party could end in a whimper. Despite the aggressive campaign unleashed by the Arvind Kejriwal-led AAP, the pollsters were somewhat reluctant in giving it a major advantage.

However, the exit polls indicated the AAP could apparently inflict more damage on the Congress rather than the BJP. It seems the triangular contest of the BJP-Congress-AAP in Gujarat could have benefited the BJP this time, which had failed to touch three figures during the 2017 Assembly polls.

While the exit polls indicated that the BJP was set to make a sweeping comeback in Gujarat, the Congress’ electoral downslide continued unabated.  While the AAP’s debut in Gujarat might not translate into getting a large chunk of seats, its vote share, however, could possibly be impressive, indicated pollsters. They also predicted that the AAP could record between 10-20 per cent of the vote share in Gujarat.