BRO engineer among 11 killed in avalanches

The bodies of ten of the victims were retrieved from beneath the heaps of snow by the rescuers on Saturday. 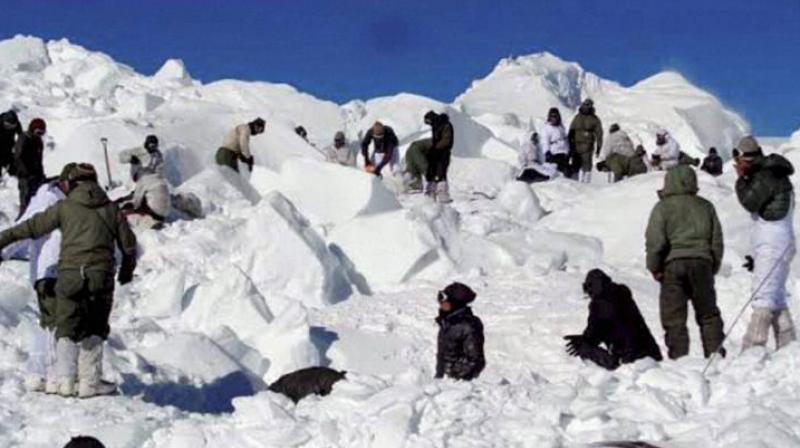 Srinagar: Eleven persons, including a junior engineer of Border Roads Organisation (BRO)’s Project Beacon, were killed and two other wounded when swept by three successive avalanches in Jammu and Kashmir’s Kupwara district on Friday.

The bodies of ten of the victims were retrieved from beneath the heaps of snow by the rescuers on Saturday. Among them were a couple, three more women, the daughter of one of them and a toddler, officials said. They added that a couple of persons are reported missing following the series of avalanches hit the area.

“The officer of Beacon’s 109, RCC, identified as M.P. Singh, a resident of Varanasi district of Uttar Pradesh, was killed after he was swept away by the avalanche,” the officials said. They added that Singh was on the road clearance duty when the avalanche struck him. The rescuers rushed him to a nearby medical facility run by the Army where doctors declared him brought dead.

They said that most other victims were travelling in a Sumo cab which was swept by an avalanche along Sadhna Top mountain pass close to the Line of Control (LoC) in Kupwara.

Strategically important, Sadhna Top is the peak of Sadhna Pass, a mountain pass located in the vast Shams Bari mountainous range and connects Karnah tehsil of Kupwara with the rest of Jammu and Kashmir. The officials said that two more passengers from another vehicle abandoned by them in view of heavy accumulation of snow on the road also came under an avalanche  and were pushed down into a deep gorge.