The ghastly mishap occurred when the speeding school bus rammed into a truck killing four students. 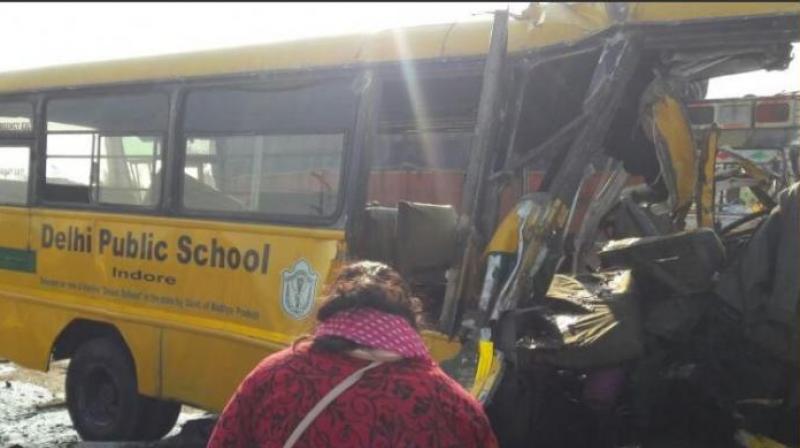 The incident had occurred when the driver lost control of the bus, which broke the divider and entered a parallel lane, before colliding head-on with the truck. (Photo: File)

Indore: A Delhi Public School official was among three persons arrested by police in connection with the death of four students in a road accident in Indore on January 5 and were booked for culpable homicide.

The ghastly mishap occurred at the Kanadiya bypass when the speeding school bus rammed into a truck on Friday, killing four students and the bus driver, Rahul Sisodia.

A faulty speed governor device installed on the bus is suspected to be the cause behind the accident.

The trio have been booked under the section 304 (punishment for culpable homicide not amounting to murder) of the IPC over the malfunction of the speed governor installed in the ill-fated bus.

The incident had occurred when Sisodia lost control of the bus, which broke the divider and entered a parallel lane, before colliding head-on with the truck.

Four students, aged between six and 12 years, and the bus driver died in the incident, while nine other students and the driver's assistant were injured.

Six of the injured students are in critical condition.

As per preliminary investigation, though Suvidha Auto was not authorised to install the speed governor in the school bus, it did so illegally.

Speed Governor is a device which can limit the vehicle speed to a preset limit, thus improving vehicle efficiency and road safety.

He said the school bus was running at the speed of more than 60 km per hour when it crashed into the truck.

As per a Transport department rule, speed governors should restrict the speed of school buses at 40 km per hour, the officer said.

He said more charges were likely to be slapped against the accused trio during the course of investigation.

Officials suspect that a serious technical problem in the vehicle's steering or carelessness on the part of the driver had led to the accident.

DPS Indore principal Sudarshan Sonar had claimed that the ill-fated bus was fully fit to run on the roads.