Eleven of them died and three turned approvers, while two other accused confessed and were convicted in 2006-07. 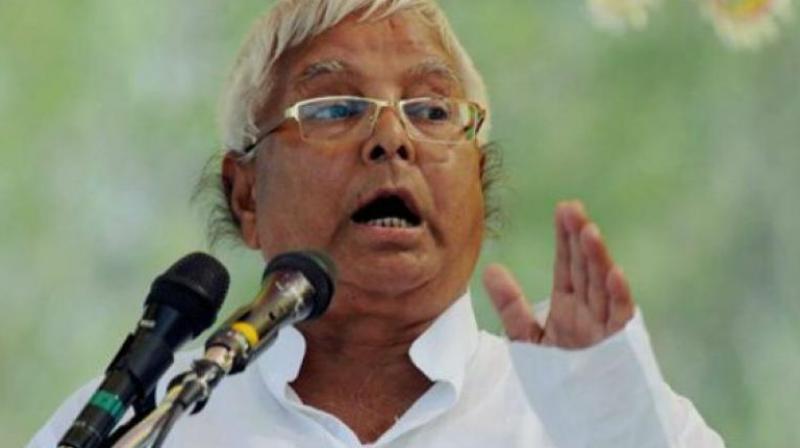 Ranchi: RJD chief Lalu Prasad Yadav, a convict in the fodder scam, suffered a massive blow on Saturday when a special CBI court sentenced him to three-and-a-half years in jail and slapped a fine of Rs 10 lakh. The fodder scam case relates to fraudulent withdrawal of Rs 89.27 lakh from the Deoghar treasury 21 years ago.

The punishment, for offences of cheating and criminal conspiracy, was handed down to 69-year-old Lalu Yadav by CBI court judge Shiv Pal Singh via videoconferencing after two deferments over the last two days.

This is the second time that Lalu Yadav has been jailed in a case related to the Rs 950 crore fodder scam that unfolded during the 1980-90s.

Soon after the judgment, Lalu Yadav’s younger son Tejashwi Yadav said, “All options are open. We will definitely move the high court for bail and challenge the verdict. But first our lawyers want to read the judgment.”

Legal experts said that a jail term of three years or less for Lalu Yadav would have immediately made him eligible for bail.

Lalu Yadav was given the jail term under the Prevention of Corruption Act (PCA). He was fined Rs 5 lakh each under the IPC and the PCA, CBI counsel Rakesh Prasad said, adding that a failure to pay the fine would entail another six months in jail.

The RJD chief, who was convicted in the second fodder scam case on December 23, is at present lodged in the Birsa Munda Central Jail in Jharkhand.

Lalu Yadav’s conviction and sentencing in the Deoghar treasury case will be his seventh jail journey. Earlier, he had spent around 364 days in prison.

Lalu Yadav’s lawyers had earlier pleaded for minimal punishment for him, citing his old age and poor medical condition.

The CBI special judge had on December 23 acquitted former Bihar chief minister Jagannath Mishra and five others in the Deoghar treasury case while upholding Lalu Yadav and 15 others guilty of furnishing fake bills and vouchers of Rs 89.27 lakh to the Deoghar treasury for fodder procurement between 1991 and 1994. Lalu Yadav was the chief minister of Bihar during the period.

In 1996, the Patna high court had ordered an inquiry into the fodder scam cases and a chargesheet in the Deogarh treasury case was filed against 38 people on October 27, 1997. Eleven of them died and three turned approvers, while two other accused confessed and were convicted in 2006-07.

On September 30, 2013, Lalu Yadav was given a prison term of five years in the first fodder scam case pertaining to illegal withdrawal of Rs 37.7 crore from the Chaibasa treasury in the early 1990s. He was released on bail by the Supreme Court after spending over two-and-a-half months in jail.

The conviction in the fodder scam’s Chaibasa treasury case had resulted in a major setback to Lalu Yadav as he was disqualified from contesting elections for six years.