Politicians of all parties condemned the violence. 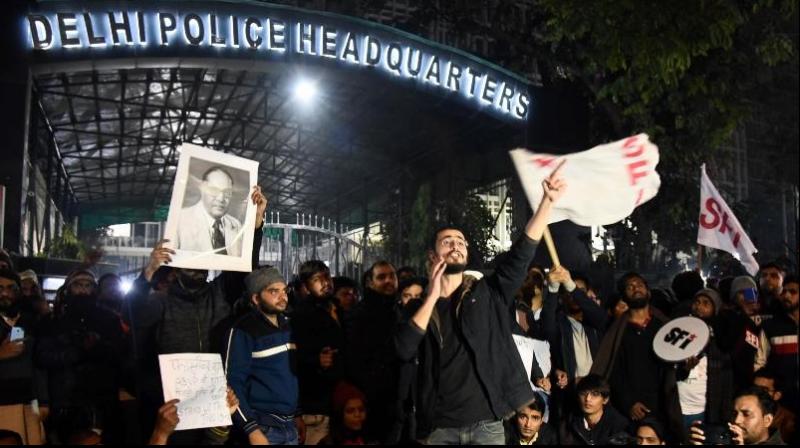 New Delhi: With no arrests yet in the apparently planned attack on students and teachers at the Jawarharlal Nehru University, protests were held across India on Monday and the clamour grew for the resignation of the vice chancellor who is being blamed for inaction during the violence that left 34 people injured.

As horrific first-person accounts emerged of the attack on Sunday evening, including on JNU Students Union president Aishe Ghosh, Delhi Police said that they have transferred the case to the Crime Branch, which claimed to have found "vital clues".

Politicians of all parties condemned the violence. The opposition and JNU students blamed the ABVP, the students' wing of the BJP for the violence, and accused the Delhi Police of inaction. The BJP said campuses should not become political battleground.

I was specifically targeted on Sunday during a peace march on campus. Around 20-25 masked persons disrupted the march and attacked me with iron rods, union president Ghosh, her head swathed in bandages, told PTI after being released from hospital earlier Monday. She received at least 15 stitches on the head, and her arm was in a cast after the attack.

The ABVP has denied being responsible, and in turn, has blamed Ghosh's Left-supported union of stage managing the violence. It also claimed that many of its activists were injured, but has not presented any to the media.

"For the last four-five days, some RSS affiliated professors were promoting violence to break our movement," Ghosh alleged at a press conference later.

"The horrifying and unprecedented violence unleashed on India's young by goons with active abetment of the ruling Modi government is deplorable and unacceptable," alleged Congress president Sonia Gandhi.

Union minister Smriti Irani said campuses should not be made a "political battlefield" and hoped students would not become political pawns.

With no face to Sunday night's terror, videos of which did endless rounds of social media and news channels, the tide of anger showed no signs of ebbing.

Protests against the citizenship amendment act and the attack against students of JNU -- which has seen a 70-day strike against the hike in fees -- segued into one with students joining parties across the political spectrum to call for accountability.

The 34 people, including students and faculty members, who were admitted to the AIIMS trauma centre were discharged on Monday morning, officials said.

Large protests took place Monday in universities in Pondicherry to Chandigarh and Aligarh to Kolkata. Protests were also held at the National Law University in Bangalore and IIT-Bombay as well as at the Tata Institute of Social Sciences.

"Today it is them, tomorrow it can be us," Raiza, a Pondicherry University student, said.

In Mumbai, the protest by students at the Gateway of India that started at midnight continued.

In New Delhi, the youth wing of the Congress Party took out a torchlight march through central New Delhi.

In Nepal, JNU alumni gathered at Maitighar Mandala in Kathmandu to voice their protest, as did students at Oxford University and University of Sussex in Britain and at Columbia University in the US.

While Yadav said masked men attacking teachers and students in JNU shows how "low" the government will stoop to rule through "fear" and accused the BJP of using violence and hate to polarise society, Mayawati termed the mob attack shameful and demanded a judicial probe.

Bollywood spoke up too. "Horrifying", "heartbreaking" and "barbaric" is how many in the film industry, including actors-filmmakers Anil Kapoor, Alia Bhatt, Rajkummar Rao, Anurag Kashyap and Sonam Kapoor Ahuja, described the attack.

The JNU campus was a battle zone with the shattered windowpanes and the shards of glass mute testimonies of the violence the night before.

As students began cleaning the debris, hundreds of security personnel swarmed the campus - and outside it too -- keeping a watchful eye on the restless crowds that sang songs of revolution and raised slogans. Many students also packed their bags and left for their homes.

A Kashmiri student, requesting anonymity, said he was chased by the mob and had jump from the first floor with his friends.

"We were three-four friends inside a room. Suddenly, some of our friends came running and said, 'The ABVP is coming with lathis and rods'. We latched the room but within a few seconds, they started banging on it with lathis. They also broke glass windows on top of the door. Scared, we opened the balcony door and jumped from the first floor. Otherwise they would have killed us," the student said.

Surya Prakash, a visually challenged student, was beaten too.

"They came to my room and beat with me rods. I told them I am blind but they continued the assault. I have been hit badly and I will have to go for an X-ray. I'm scared," he said.

Questions swirled in the air.

How was the armed mob allowed to enter the campus? Why was it taking so long for police to make an arrest?

Shreya Ghosh asked how armed goons could enter the campus and said, "The attack could not have happened without the connivance of the administration and police."

The Home minister spoke to Delhi LG Anil Baijal and requested him to call representatives from JNU for discussions, officials said. However, Shah did not mention JNU when he addressed a gathering here later in the day.
The HRD Ministry, on its part, met officials from the JNU administration and took stock of the situation on the campus but Vice-Chancellor M Jagadesh Kumar skipped the meeting.

"A detailed report has been sent to the HRD Ministry about the sequence of events," Kumar told PTI.

The clamour for Kumar's resignation grew louder with the students' union and the JNU Teachers Association accusing him of behaving like a "mobster" and of "perpetrating violence" in the university.

"The violence that happened is the result of the desperation and frustration of the VC and his cronies, JNUSU said.

Congress leader P Chidambaram said the violence in JNU was an example of the country's "descent into fascism" and the incident was the most clinching evidence of India rapidly descending into anarchy.

And while Maharashtra Chief Minister Uddhav Thackeray of the Shiv Sena compared the JNU violence with the 26/11 terror attack, his counterpart in Kerala and political rival Pinarayi Vijayan said "Nazi-style attacks" on students and teachers inside the campus were an attempt to create unrest and violence in the country.

The Left leader said the attack on students is an "appalling display of intolerance running amok".