Tension prevailed in the area as fishermen gathered in front of the hospital to protest the firing by the Sri Lankan navy. 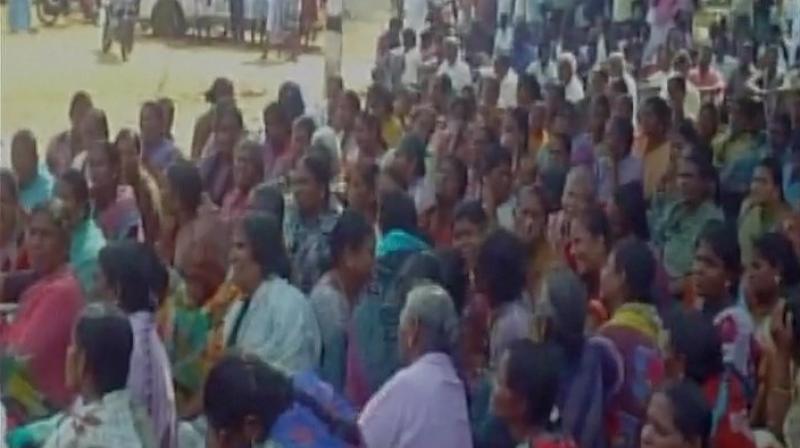 Protest in Rameshwaram after an Indian fisherman was shot dead by Sri Lankan Navy. (Photo: Twitter)

Rameswaram: A 22-year-old Indian fisherman was shot dead today allegedly by the Sri Lankan navy while he was fishing in a mechanised boat at a short distance off Katchatheevu islet, fisheries department officials said.

The incident occurred on Monday evening when Bridgo, from Thangachimadam in central Rameswaram of Tamil Nadu, was fishing near the islet along with others and the Sri Lankan naval personnel arrived at the spot and opened fire, Fisheries Department Assistant Director Kulanchinathan said.

Bridgo was shot in the neck and died on the spot, he said, adding another fisherman, Saravanan (22), suffered injuries in his leg in the firing while others who went along with them escaped unhurt and returned to the shore at 12:30 am.

Rameswaram Fishermen Association President P Sesuraja said that more than 2,000 fishermen were fishing well within Indian waters when the Sri Lankan naval personnel came to the spot taking them by surprise.

The Lankan navy officials did not even fire a warning shot, he alleged.

Kulanchinathan said the body has been brought to the Rameswaram hospital and a case has been registered at the Jetty police station.

Meanwhile, tension prevailed in the area as fishermen from Thangachimadam coastal hamlet gathered in front of the hospital to protest the firing by the Sri Lankan navy.

The Tamil Nadu government had on Sunday protested the "escalation" in apprehension of its fishermen by Sri Lanka and said the Centre did "not seem to put adequate pressure" on Colombo regarding the matter.

In a letter to Prime Minister Narendra Modi, Chief Minister K Palanisamy had referred to the arrest of 32 Indian fishermen by the Lankan authorities in the last few days and said these incidents were causing hardship and mental agony to the fishermen community.

Noting that currently there were 85 fishermen and 128 fishing boats in Lankan custody, he had urged Modi to direct the External Affairs Ministry officials concerned to take concrete action through diplomatic channels to secure their release.